Skip to content
Home / Delve into the Depths in the Kobold Blog / Adventurer’s Field Guide: Surely from the Sea 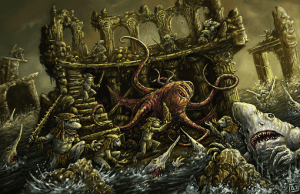 They say the sea is full of treasures, and surely, seashells are among them. They have been used for artwork, money, jewelry, and much more. Many reputedly have mystic associations and uses, so imagine what potential they might hold in a fantasy world! If you’re running a game on or near the sea, perhaps, you can shell out some of the following treasures to your players or simply let them serve as inspiration for your own ideas. Surely, you can harvest a pearl from something in the list and make it your own…