Skip to content
Home / Delve into the Depths in the Kobold Blog / Beyond Damage Dice: Bows 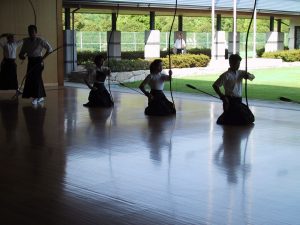 The composite bow’s unique construction gives it an incredibly heavy draw, making it usable only by the strongest archers. Characters with a Strength score of 14 or lower have disadvantage on attacks made with a composite bow.

Staggering Shot. As an action while wielding a composite bow, you may make a single ranged weapon attack. If this attack hits, the enemy takes full weapon damage and must make a Constitution saving throw. On a failure, the target’s speed is reduced to 0 until the end of its next turn.

A character wielding a shortbow or longbow can use the following maneuvers.

Pinning Shot. When you make an attack with a bow, you may attempt to pin a Large or smaller creature to a wall or surface by catching their clothing with the arrow’s point. This maneuver can be used against creatures without clothing at the GM’s discretion. Make an attack roll; if the attack hits, the target must make a Strength saving throw. On a failure, the target’s speed is reduced to 0 until the arrow is removed. The target can make another Strength saving throw as an action on its turn.

Distracting Shot. As an action, make a single attack with your bow. You intentionally miss your target but give an ally the chance to attack while it is distracted. The next attack roll against the target has advantage if it is made before the beginning of the target’s next turn.

Trick Shot. As an action, make a single stylish bow attack with disadvantage. If the lower roll would also hit the target, you automatically score a critical hit.

A character wielding a light or heavy crossbow can use the following maneuvers.

Shrapnel Shot. As an action, make a single attack with your crossbow against an unattended object. The attack deals double damage to the target. If the object is destroyed, it explodes into a cloud of shrapnel. Choose one of the following options:

Patient Shot. You carefully align your crossbow’s sights over your target. As an action in a turn that you have not moved, you may make a single crossbow attack with advantage.

In campaign settings with firearms, these maneuvers can also be used by a character who wields a rifle.

Concealed Sidearm. Instead of making a Dexterity (Stealth) check to hide yourself, you may make a Dexterity (Sleight of Hand) check—contested by an active or passive Wisdom (Perception) check—to conceal your hand crossbow. As an action, you may make a weapon attack with a concealed crossbow against a creature that has not yet acted in combat. This attack has advantage.

In campaign settings with firearms, these maneuvers can also be used by a character who wields a pistol.

10 thoughts on “Beyond Damage Dice: Bows”