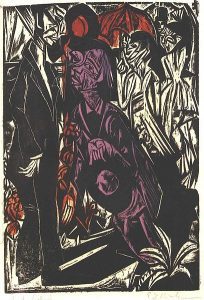 As the fire burned higher, a shadow flickered where none should have been. Looming toward the camp, it silently observed the sleeping forms arranged on the far side of the fire pit. Turning toward the one who had summoned it, it slowly drew a single word in the soft sand…

The shadowy remnants of once-great orcs who have made such an impact on the material plane that a shadowy remnant of them remains behind after they die. Able to glimpse the future, a penumberal atavus can be summoned to answer simple questions of what will be.

TACTICS
Before Combat A penumberal atavus doesn’t actively seek to combat the living and avoids interacting with them unless summoned or otherwise forced.
During Combat A penumberal atavus always attacks whoever initiated the encounter. They attack others if first attacked by them but will not initiate combat with anyone else.
Morale Given that they are ethereal in nature and a shadow of their former selves, the penumberal atavus, if it attacks, does so until its victim is unconscious, dead, or the atavus has been destroyed. They do not fear death or destruction.

SPECIAL ABILITIES
Answer Summons (Su) The ritual for summoning a penumberal atavus is very simple and one need not be an orc to attempt it. Staring into an open fire while outside in the creature’s territory, one must utter the words (in Orc or Common) “I summon you, the ancestors of this land.”

If a penumberal atavus is successfully summoned, it appears as a shadow near the fire after 1d4 rounds.

If it appears, there is a 15% chance (20% chance for non-orcs who have summoned them) that it will immediately attack the person who invoked the ritual.

If it does not attack, the invoker can ask one question regarding an act they are considering or about the reasons behind another’s actions. This question must be a yes or no question. A few example questions:

The penumberal atavus indicates yes or no and (at the GM’s discretion) may attempt to impart more information either by writing a few words or by drawing symbols.

Once it has answered the question asked of it, the penumberal atavus expects to be given a token of its past life in the form of food or drink. A few crumbs left on the ground or a few drops of wine spilled are sufficient and the penumberal atavus will depart immediately. It will flit back into the shadows and leave the area as rapidly as possible. Failure to leave such a gift may cause (50% chance) the penumberal atavus to attack.

Shiver (Ex) On touching a target (touch attack), the penumberal avatus causes that target to begin shaking violently as if extremely cold. These violent shivers last for 1d4+1 rounds and give a −2 penalty to all attack and damage rolls.

A penumberal atavus is the shadowy remnant of an ancestral orc, whose presence in life was powerful enough to leave a lasting impression on the world. Solitary and wandering by nature, these creatures do not generally interact with the living of their own free will.

They appear literally as the shadows of their former selves, sometimes displaying the grisly reminders of how they perished. While they can understand Orc and Common, they cannot speak.

They can communicate by drawing in soft substances, such as snow or sand, with their spectral fingers.

Being an ethereal creature, a penumberal atavus prefers the night although they can occasionally be seen in daylight. They easily flit from shadow to shadow and are very hard to spot or track.