Skip to content
Home / Delve into the Depths in the Kobold Blog / Adopt-a-Sailor: Q&A With WoTC’s Richard Baker 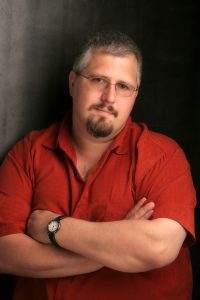 Kobold Quarterly’s Adopt-a-Soldier program is open to all branches of the military: sailors, marines, airmen, and guardians are all eligible to receive free gift subscriptions from sponsors.

Sailors have relied on games to relieve the monotony of long voyages ever since oars first touched water. To get the scuttlebutt on gaming in the navy, we naturally went to Richard Baker. Before he became a game designer, Rich served as a deck officer on board the USS Tortuga. He has designed, written, or contributed to more than 70 game products, including Dungeons & Dragons (3rd and 4th Edition), Alternity, Axis & Allies Miniatures, Axis & Allies Naval Miniatures: War at Sea, and numerous D&D adventures and sourcebooks…

What made you decide to enlist in the navy, and how long did you serve?

As a kid, I was always pretty fascinated by the military, and when I was starting to think about what I wanted to do with myself in high school, I decided that I wanted to give something back to my country by serving. I also wanted to test myself and see what I was capable of, so I decided to earn my commission during college. I attended Virginia Tech, where I was enrolled in NROTC and was a member of the Corps of Cadets. On graduation, I was commissioned as an ensign and assigned to USS Tortuga as the ship’s Second Division Officer. I served for 3 years on active duty as a surface warfare officer, and I was in the reserves for 5 more years.

What games were you playing and running during the time you served?

My favorite games back then were D&D and Champions. I GM’d most of the time and was the primary instigator of our games. We also played a lot of wargames. My friends and I were big fans of the 6th Fleet series by Victory Games, as you might imagine. Several of my college buddies were stationed in Norfolk or close by, so we were able to get together and play on weekends every now and then.

How did your navy life affect your gaming life, and how did you compensate for that?

For me, gaming was a hobby I indulged when I was off the ship. With the ship’s schedule for heading out to sea and my own schedule for attending different schools and training courses, it really wasn’t feasible to maintain any sort of continuous campaign, so I mostly ran one-shot games or set up gaming weekends with my buddies. When I served, we didn’t have any email access or ability to keep in touch while we were at sea, so I sometimes went weeks or months without being able to play or stay in touch. I did keep a personal computer in my stateroom, which was cutting-edge stuff at the time; I had this big PC and monitor crammed into a tiny desk and bungie-corded in place. I used to take it with me if I was going anywhere for more than a week or two.

Did you have any other creative outlets available to you while you were away from home?

While I couldn’t play D&D (or any other games) nearly as much as I would’ve liked during my active duty stint, I did find the time to take my first shot at writing a novel. Over the course of a couple of years I managed to finish a 200,000-word beast I called Kingslayer. I never did sell it, but large pieces of the setting I created for that novel eventually surfaced as the Anuirean Empire in the Birthright campaign setting. Writing a novel from start to finish—even one you don’t sell—teaches you a lot about what it takes to be a writer. That was where I learned that I could really do it.

What effect did your experiences in the navy have on your games? What did you bring from the ship to the table (or vice versa?)

Well, my navy experience gave me a real leg up on any sort of nautical flavor or material that I happened to work on for RPG sourcebooks. Back in the day, I worked on some Spelljammer sourcebooks and articles where it came up (my first professional publication was an article on piracy in the Spelljammer setting). It came up in the Birthright setting, where I wound up creating a set of naval battle rules for medieval fleets, and again as recently as 2005, when I led the design of the 3rd Edition sourcebook Stormwrack. Outside of RPGs, I’ve put my navy experience and interest in military history to use in recent Axis & Allies editions and the Axis & Allies Naval Miniatures game. I’m the guy behind the War at Sea minis, and I’m really proud of ‘em.

What difference do you think a program like Kobold Quarterly’s Adopt-a-Soldier makes in the lives of navy personnel who game?

I think it’s a great idea. Sailors today have much better ways to keep in touch with “the real world” when they’re out at sea or out of the country than they did when I was on active duty, but it’s hard to stay up on your favorite hobby when you haven’t seen a hobby store in 3 months. The farther away you go, the more of a treat it is to get something from back home like a gaming magazine. Even if you can’t put it to use right away, it’s fun to think about the next game you want to run when you do come home.