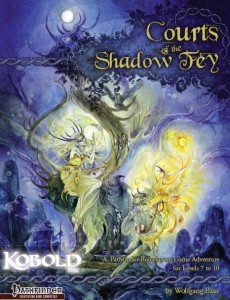 Courts of the Shadow Fey, the fan-favorite planar adventure from Wolfgang Baur, is now available for the Pathfinder Roleplaying Game!  Take your players from Midgard’s Free City of Zobeck to the Plane of Shadows to face the Queen of Night and Magic herself, in this  inventive take on courtly combat and sandbox roleplaying.

Ben McFarland (Streets of Zobeck) has joined Wolfgang to create an expanded 130-page edition that’s updated and revised based on play.

Courts of the Shadow Fey for Pathfinder includes:

Get Courts of the Shadow Fey at the Kobold Store, Amazon, Paizo or DriveThru RPG. Then download the free PDF poster map of the Courts to enter the world of shadows and play the Pathfinder RPG on a whole new level!