Skip to content
Home / Delve into the Depths in the Kobold Blog / Your Whispering Homunculus: At the Horse Fair, Part 1 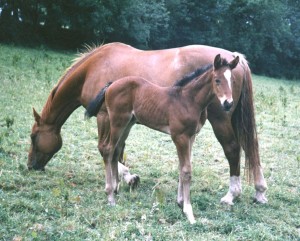 “Blessed Lord, I was at the window today looking into the streets.”

“Foolish insect, keep your face from the window, I cannot risk losing another house to the flames.”

“I beg forgiveness master, but my eyes were drawn to the steeds men use, and it gave me an idea…”

A trusty mount of many an adventurer, the horse receives only scant detail in the rules. However, they vary enormously: from sway-backed nag to majestic shire. If you are running a campaign where horses are more prevalent, you may wish to consider expanding on their details by assigning traits to some or all such creatures in your campaign as suggested below…

As a rule of thumb, a horse has a 25% chance of 1d3 good traits and a 25% of 1D3 bad traits; however, you may wish to modify this according to who (if anyone) trained it (see below). The maximum number of traits is 3 times Intelligence (which is usually 2). A horse may have good and bad traits, but if these traits clash (racehorse and plodder for example), the effects cancel each other out but still count toward the maximum amount of traits a horse can have.

Traits come from training (if any) and character. While, generally, a horse that has been well trained should only have good traits, they can pick up bad habits as well. The value of a horse with traits is reflected in its gp cost; a horse with one good trait costs 50% more than normal, and each extra good trait doubles that bonus in value: thus a horse with four good traits is worth five times its usual value. A horse with a bad trait is worth half its listed price, a quarter with two and so on. For horses with a mixture of traits, cancel each good trait with a bad one in terms of cost.

Detecting traits is not always easy, and some traders use their talents to cover up any poor traits (Handle Animal DC 15). Certain unscrupulous dealers use tricks of the trade, such as doping, to hide bad traits; such traders modify the DC of spotting bad traits by 5 with the help of herbs and alchemical substances (Craft (alchemy) DC 25 masks a trait for 1 hour), but the odor, or other signs, of this tampering can watched for (Perception DC 20).

Teaching traits through good training is time-consuming. There are several tricks an animal can be taught using the Handle Animal skill (see Pathfinder Roleplaying Game Core Rulebook), and teaching traits is handled in a similar way. To teach a trait from any of those listed below requires 8 weeks training and a Handle Animal check (DC 20). Each time the character attempts to stack a trait, the DC increases by 2. Traits count as a trick against the animal’s allotted applicable amount.

Bad traits can be removed through proper training (Handle Animal DC 25); each trait requires 8 weeks training. Removing a bad trait doesn’t free up a slot for the animal to be taught another skill or trait and bad traits, like good, count as a trick against the animal’s possible maximum amount it can learn.

Only traits listed as doing so can stack.

Cunning—Riders with the Mounted Combat feat add a +1 competence bonus to their Ride skill when hit. This bonus stacks with itself (up to +5), counting as a further good trait each time.

Good-natured—All Handle Animal checks made on the mount gain a +1 competence bonus. This bonus stacks with itself (up to +5), counting as a further good trait each time.

Racehorse—The mount has a base move of 10 ft. greater than standard.

Sensitive—The horse doubles the bonuses of the Animal Affinity feat for riders that have it.

Sharp—The mount is exceptionally bright and has 1 point more Intelligence than normal, making it a prized mount to train.

Trained—Pick two DC 15 tricks from the Handle Animal trick list. The mount has these as standard tricks it can already perform. These tricks do not count toward the maximum amount of tricks an animal can be taught. The trait takes a single trait slot.

Well-Balanced—The horse augments the Ride skill of the rider, providing a +1 competence bonus. This bonus stacks with itself (up to +5), counting as a further good trait each time.

Well-Trained—Pick a DC 20 trick from the handle animal skill list. The mount has this as an inherent trick it can already perform.

Bad Tempered—The animal decreases the Handle Animal skill of anyone training it or riding it, imposing a −1 penalty. This penalty stacks with itself (up to −5), counting as a further bad trait each time.

Hateful—The horse negates any skill bonuses from the Animal Affinity feat of riders.

Impossible to train—The animal is incapable of being taught one DC 20 trick from the Handle Animal trick list.

Plodder— The mount has a base move of 10 ft. lower than standard.

Skittish—The horse is nervous in battle and increases relevant DC checks by 1. This penalty stacks with itself (up to −5), counting as a further bad trait each time.

Willful—The mount decreases the rider’s Ride skill, imposing a −1 penalty. This penalty stacks with itself (up to −5), counting as a further bad trait each time.

8 thoughts on “Your Whispering Homunculus: At the Horse Fair, Part 1”