Skip to content
Home / Delve into the Depths in the Kobold Blog / Monday Monster: Crag Drake for 4E

The Halls of the Mountain King project is taking its new monsters from OGL to 4E this month, and so we figured we’d show you a re-designed version of the 3E/OGL Crag Drake that was featured here back in February. 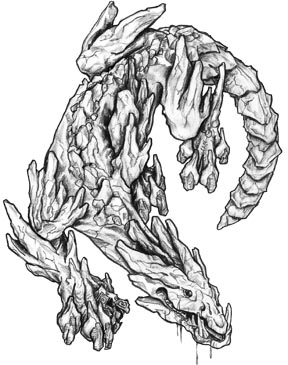 Stone made predatory beast, these creature prowl cavern tunnels and mineshafts as jaguars would stalk through a jungle. Their powerful limbs end in jagged metallic claws and chipped stone teeth fill their powerful jaws. Rocky protrusions mark their durable hides and serpentine tails lash wickedly behind the beasts.
[More…]

c Corrosive Breath (Standard; recharge 56) ♦ acid
close blast 5; +10 vs. Reflex; 3d8+5 acid damage, and ongoing 5 acid damage (save ends). Miss: half damage, and no ongoing acid damage.
Spry Dash (Move; at-will)
The crag drake shifts up to half its speed.
Stone Meld (Move; recharge 6) ♦ polymorph
The drake shifts into an adjacent square made of stone, and becomes part of the stone. While melded, the drake has total concealment and resist 5 all, but is blinded. It can move and climb its speed within the stone, but must remain adjacent to an open square at all times. It can end the meld as a free action on its turn, shifting into an adjacent unoccupied square and losing all benefits of the meld. If the drake attacks from within the stone, the meld ends as part of the attack action.

Crag Drake Tactics
The crag drake begins combat inside the stone (using its Stone Meld ability), waiting in ambush for the PCs to pass, at which time it attacks with Corrosive Breath. It then uses a Spry Dash to get out of melee range.

The crag drake makes liberal use of its Spry Dash to avoid melee combat as much as possible, preferring instead to wait for its corrosive breath to recharge so it can use it again. It uses its Claw and Bite attacks only when cornered.

When bloodied, the crag drake uses Stone Meld to hide inside the stone walls, positioning itself for another surprise Corrosive Breath attack. Inside the stone, it moves often to keep the PCs guessing as to its location.

DC 15 A crag drake is the bane of a successful mining operation. The creature stalks underground denizens and feeds upon them and their precious minerals. Never far from a rich vein of metal or minerals, some prospectors find the presence of a crag drake to be a sign of good luck, if not a difficult obstacle to overcome. A crag drake’s coloration and stealthy nature lends to its ability to skulk through darkened mine shafts and natural caverns. This hunting beast stands between 3 and 4 feet tall at the shoulder and nearly 10 feet long from flickering tongue to whipping tail. Powerful muscles and a dense rocky hide cause this creature to weigh in at roughly 400 pounds at full size.

DC 20 A crag drake lives only to hunt. Known to lie in wait for prospective miners and underground wanderers, the adult crag drake relies on a corrosive breath, vicious teeth and claws and elusive tactics to wreak havoc on its victims. Stealthy and cunning, this beast is an ever-present shark stalking the seas of stone beneath a mountain.

DC 25 Whether it be eating rich veins of minerals and precious metals or stalking dwarves and other subterranean creatures, a crag drake makes its home at the top of the food chain. A crag drake eats living flesh, but morsels like that are merely appetizers for its true proclivities, rich minerals. These meals take much longer to consume, however, so a crag drake works to thin the competition until it has time to extract the ore and digest it outside the mouth with its caustic saliva and then lap the metals and gems with its wicked flickering tongue.

DC 30: A crag drake prefers to hunt alone, but at times, in an especially rich location, it will share its territory with a mate. More often, a clutch of crag drakes will roam separate sections of a mountain in order to clear it of competitors, and then they convene on the vein, draining it dry, leaving pockets of corroded rock in their wake. A crag drake, being a creature of stone itself, finds comfort in the cramped bowels of the earth. The echoes of a quivering mountain rumbling through the yawning tunnels, the glittering of valuable materials lying just below the surface of rough stone and the hiss and spew of pressurized steam and gasses seeping through slow-splitting fissures are the hallmarks of home for these prowling fiends.

Like to do some monster design with us? Join the Halls of the Mountain King project today!