Skip to content
Home / Delve into the Depths in the Kobold Blog / Heroes of Nuria Natal: Face of Bastet 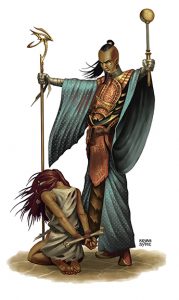 Oh, the lands of Nuria Natal! Today, you bring us the will of the gods.

As a Face of Bastet, you are the living image of your goddess to the people. You invoke not only her name but her image in combat or to inspire. Often, those of your order serve as missionaries and mystagogues, teaching the masses and showing the true power of Bastet. Choosing this feature replaces the Divine Domain of the Cleric Class.

The spells granted by Bastet to her clerics help them to spread her image, commune with her other servants, and compensate for their non-feline shortcomings.

Way of the Cat

At 1st level, you become proficient in Deception and Stealth. Your proficiency bonus is doubled for any skill check you make using those skills.

Starting at 2nd level, you can use your Channel Divinity to grant yourself the ability to strike with supernatural weapons. Your hands transform into the paws of a large cat. The claws are magical and do 1d6 damage plus your strength plus your charisma modifier. You are considered proficient with the claws as a melee weapon. You may maintain these for a number of rounds equal to your wisdom modifier. The claws do not interfere with your ability to cast spells, but you have disadvantage when trying to manipulate objects.

At 6th level, when using your Channel Divinity, you may transform your head into that of a large cat, lion, or panther. You gain a bite attack which does 1d8 plus your strength damage. The damage is considered magical. You do not lose the ability to speak in this form, nor to cast spells if you choose. The mien lasts for a number of rounds equal to your wisdom modifier.

At 8th level, when using either Weapon of God or Mien of God, your attacks deal an additional 1d8 radiant damage. When you reach 14th level, the damage increases to 2d8.

At 17th level, you become proficient with the Dexterity saving throw, and you may add one half of your proficiency bonus to any Dexterity-based skill. Additionally, you take only the minimum amount of damage from falling (1 rather than 1d6 per 10 feet.)

5 thoughts on “Heroes of Nuria Natal: Face of Bastet”