Skip to content
Home / Delve into the Depths in the Kobold Blog / Tournaments: The Iron Fist 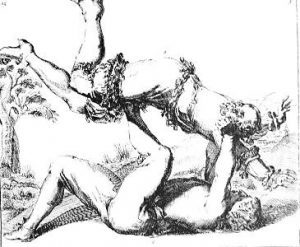 Every nation boasts its own, unique fighting arts. From pugilists in roped rings to oiled wrestlers who grunt and grapple in the dirt, to exotic fighters whose feet, knees, elbows, and even foreheads can cripple a foe for life, every culture believes its fighters are the toughest. Once every four years, that belief is put to the test when fighters are drawn from across the region to compete in the Iron Fist.

What Is the Iron Fist?

The Iron Fist is an elite, bare-handed, no-holds-barred fighting tournament. Fighters are recruited from the farthest corners of the organizers’ reach, including everyone from champion athletes and hometown heroes to obscure adventurers and warriors some believe are little more than pit-fighter legends. Once fighters have agreed to participate, they make their own way to where the tournament is being held that year. Upon arrival, they’re given time to rest, recuperate from their journey, and train for several days in order to get into top fighting form. While there are no rules that state fighters must remain apart from one another, most choose to in order to prevent their competitors from watching how they fight in order to get an edge.

The tournament begins at dawn. Fighters are drawn randomly and pitted against each other in harsh, brutal matches. The only rule is that fighters must step into the arena naked, with the winners to be decided by skill and strength alone. Some warriors fight with honor, holding to their own code even when they’re exhausted and swaying on the sand of the arena. Others fight like savage beasts, crippling their opponents in order to end the fight as soon as possible. Death is not the point of a bout in the Iron Fist, but it has been known to happen when a fighter refuses to stay down or when someone puts too much power behind a strike or hold.

The sheer brutality of the tournament is enough to give any fighter pause, but there is another aspect of it that some warriors don’t think about before they agree to participate. From the first fight to the last, there is no intermission. Aside from the few minutes it takes to remove the defeated fighter and sop up the blood, there is practically no time between bouts. Fortunate fighters won’t have their names drawn from the pot until all their opponents have fought each other and taken the edge off their strength… unfortunate fighters will have to fight one fresh opponent after another with barely enough time to catch their breath and wash the blood from their teeth.

The winner of the Iron Fist is given a purse of gold, but that is only a consolation prize. The true glory of this tournament is being able to stand alongside the legends of the arena, and to have your name marked in stone as a victor. Winning this tournament changes one’s reputation, and often, those who leave the arena find hordes of eager young men and women begging to be taught. Some fighters ignore the pleas and walk off into the world again. Some, though, establish schools. Several of these champions’ colleges have had representatives chosen for the Iron Fist, ensuring that their founder’s legacy is still represented in the arena.

Of course, the only people who truly know the extent of the rewards given to the victors are the victors themselves. It’s entirely possible there’s more than meets the eye… but it’s also possible that’s a myth created by the organizers to keep fighters leaping at the chance to test their mettle.

The Iron Fist In Your Game

The Iron Fist can take as big or as small a part in your game as you need. For example, if you need a background for a bad-ass NPC, you could bring across how skilled and deadly he is by saying he is the only man to even win the Iron Fist five times. Bards or other fighters who have heard of the tournament recognize the name and caution the rest of the party against antagonizing such a renowned champion.

Alternatively, the Iron Fist might represent an end goal for the monks, brawlers, and pugilists in your party. They’re adventuring to pay the bills, yes, but they’re also putting an edge on their fighting skills by pitting themselves against the most dangerous opponents they can find. With fame, fortune, and a little luck, their deeds might reach the ears of the tournament’s organizers, who will send an agent to offer an invitation. Bonus points if the character is determined to become a champion for back story reasons, such as following in a parent’s footsteps or trying to find out what happened to an older sibling who went to the Iron Fist and never came back.

However, the most straightforward way to use the tournament in your game is to make it a plot arc. Your brawler has received an invitation, and the rest of the party goes along for support. But once you’ve arrived, there seems to be something shady going on. A lot of money and prestige is riding on one fighter or another coming away as the winner, and it seems like people are trying to kill your party’s brawler in and out of the ring. Or, perhaps, you come to the tournament to act as bodyguards and entourage for an NPC who’s trying to go all the way. Now, you have to act as his security team. Or, for a totally different change of pace, you come to the tournament to watch someone fight. He seems inhuman, and that is when you realize that this warrior is just the tip of the ice berg, and the Iron Fist was a test before he and his brethren are turned loose on the battlefield as invincible shock troops, sold to the highest bidder.

The Iron Fist can be front-and-center in your plot, or it can just be a piece of background flavor you use to deepen your world. Use it as you see fit, and remember, fighters come from all walks of life. Some of them may be quite inhuman, which will lead to some truly intriguing matches.

For more fighting options for your players, check out New Paths Compendium.

1 thought on “Tournaments: The Iron Fist”