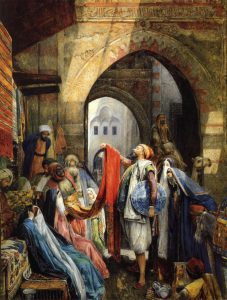 For every successfully enchanted sword, there are a score of fizzled failures. A ring of great power must have unimpressive cousins—better suited to a smelter than a hero’s finger. Sometimes your adventurers deserve a reward that is heavily flavored but lightly powered. Today, Prepared! brings you two items from the catalogue of not-quite-right magical treasures found at the back of the shelf.

You find a small, stained sack with a crudely painted figure of a halfling on the side. Opening the sack releases an odor that invokes tears and gagging to those nearby. The sack itself contains a number of crude items designed to disguise a goblin as a halfling. Laying the kit’s inventory out on the ground, you assess its value as a tool for subterfuge and determine a figure of zero. The wig leaves an odor of wet dog on your hands…

Hazzk Toadfinger is the only goblin known to have snuck into a human settlement using a disguise. While it is true that Hazzk brazenly walked through the front gates, the cause for his successful infiltration was not the disguise. The watch commander, busy checking a wagon’s load of furs, did not see the goblin strut by nor did he hear Hazzk’s unconvincing halfling greeting. The goblin disguise kit is modelled after Hazzk’s famous work, and it contains the following items: a chopped and damp wig made from worg fur, flesh-toned paste that burns when applied, a set of incomprehensibly disgusting false teeth, a canvas tunic with a poorly painted “shirt front,” and a pair of greasy gloves. Using the goblin disguise kit is in no way helpful when attempting to create a disguise, but it confers a +1 bonus to checks made to intimidate others for an hour.

You hold in your hand a simple silver fork. Embossed into the handle are the letters “JA.” The tines of the eating implement give off a slight green glow. A crowded inscription on the back of the fork reads: “To King Ragnis, may venom never touch thine lips.”

Intended to be a gift for a powerful noble, the poisonous fork represents one of many failed enchantments performed by Jastris the Attemptor. Jastris was commissioned to create a set of cutlery from silver that would warn the king if his food was poisoned. Jastris’s client presented the fork to the king, who tested its magic at first opportunity. To the horror of his court, the king took a single bite and died a foamy and agonizing death that one attendant described as “akin to watching an ale barrel bulge then explode.” The fork reportedly announced the food was poisoned several moments after the king’s death. The fork radiates a low level of magic, and an inspection from a magic-user will reveal its purpose (but not its failure.) Time has eroded much of the fork’s unskillfully created magic, and now using the implement to eat causes only mild stomach upset. The fork still informs the user that he or she has consumed poison after several bites.