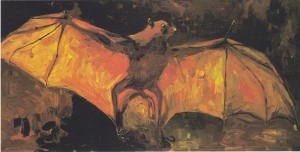 Before you hovers a black blob with two large, bat-like wings and a huge reptilian eye in its center. Whipping wildly behind it are three long tails, each terminating in a nasty stinger.

Occasionally, when an evil soul is passing into its eternal torment, something happens to shatter it. Each of these soul fragments becomes the core of a strange entity known as a yarang. The beastlike creature seeks only to complete its soul, but yarang do not seek to reunite the pieces of their old soul. Instead, they seek out the souls of others and absorb them by stinging the victim with their tails.

Yarangs are especially drawn to creatures with high Intelligence scores. Some scholars believe that a yarang instinctively feels that intelligent souls are more “nutritious” than unintelligent souls, which would explain why yarangs rarely attack animals…

SPECIAL ABILITIES
Soul Damage (Su) On a successful hit, roll 1d3. The type of ability damage is based on what tail hits the target: 1 is Int damage, 2 is Wis damage, and 3 is Cha damage. This is a negative energy effect. A creature dies if the damage to a mental stat equals or exceeds that stat.

Soul Sight (Su) A yarang can see the soul of any creature within 60 ft., regardless of cover or invisibility. This ability does not work on any creature whose body and soul are one and the same (such as outsiders). However, it can detect souls detached from their bodies (such as ghosts).

Yarangs attempt to complete their souls by trying to take the soul of another being. Most of these attacks do little more than wound the soul of the victim, since yarangs are rarely strong enough to rip out a creature’s soul, but occasionally they do succeed in killing a creature and swallowing its soul. Swallowed souls are not immediately integrated into the yarang, and any form of revival magic used within a year of the creature’s death pulls the soul out of the yarang and back into the body. Rumor has it that if a yarang absorbs enough souls, it undergoes a metamorphosis into another type of fiend, but the reports on the subject are varied and contradictory.

A yarang can be summoned with summon monster III. The spell has the evil subtype.

A yarang focuses on the intelligent creature closest to it. If multiple creatures are equidistant, the yarang attacks the one with the highest Int score (or, if Int scores are equal, the highest Cha score). Once a yarang makes a successful attack, it focuses entirely on that creature, ignoring everything else until it or the target dies. If attacked while not engaged with a target, the yarang relentlessly attacks its attacker. If a yarang cannot reach the closest creature (such as it being in a sealed room), it spends up to 2 rounds trying to reach the creature before giving up and seeking a new target.