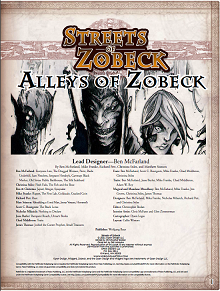 Sometimes the big book of adventures isn’t quite big enough. Sometimes a project gets a few items for the blog a little later than the editor can handle. When that happens, we know we have good stuff for a PDF supplement, and the one for Streets of Zobeck is a doozy. Yes, the mean streets just got meaner!

What You’ll Find in the Alleys

Alleys of Zobeck includes the Rampant Roach — possibly the vilest tavern in fantasy — plus the Lust domain and granted powers for priestesses of the Red Goddess, plus much much much more:

Whew, just taking a little break here in the middle of the listing, getting winded. But there’s more!

A great deal of adventure and recurring characters and new crunch for fans of the Streets of Zobeck adventure anthology—or a great introduction to urban adventures suitable for play anywhere!

Pick it up for just $2.95 at the Kobold Store, and let us know what you think!