Skip to content
Home / Delve into the Depths in the Kobold Blog / Welcome to Midgard: Griffon Knight 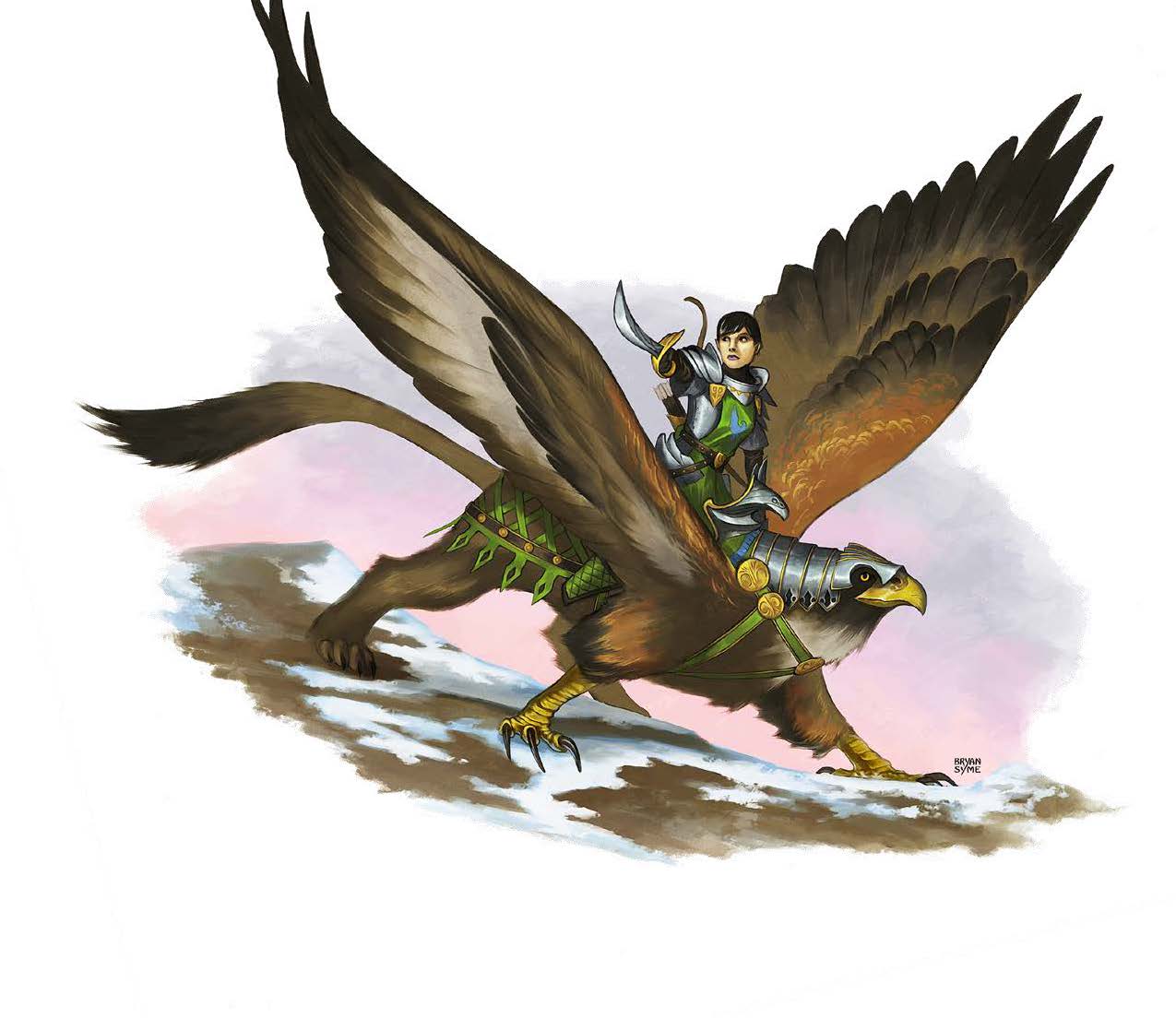 The griffon riders of Zobeck were devastated during the fall of House Stross, so they now have only a shadow of their former glory. These days, most griffon riders are mercenaries and hedge knights, but a few still nobly defend the realm as members of the Order of the Griffon Knights. Led by their doughty dwarven commander Sir Markus Lineguard, the Griffon Knights patrol the Great Northern Road and keep the Free City safe from attackers. Griffon knights swear an oath of allegiance to both the order and to their griffon mounts. The knights put the safety and health of their steeds above all else; you are not a griffon knight without a griffon to ride.

When you choose this archetype at 3rd level, you gain a trained griffon as your mount. Your griffon is a fierce and loyal steed, forming a lifelong bond with you and fighting to protect you in battle. Use the standard griffon stats, but each time your proficiency bonus increases (at 5th level, 9th level, etc.), add +1 to your griffon’s AC, saving throws, and attack bonus, and increase its maximum hit points by 10.

Your griffon obeys your commands to the best of its ability, taking its turn on your initiative. It moves and acts as you direct it, with just three action options (Dash, Disengage, and Dodge). If you want the griffon to attack, you must use your action to command the griffon to do so; this allows it to use the Attack action as a reaction on your turn. Once you gain the Extra Attack feature, you can make a weapon attack yourself in addition to ordering your griffon to attack.

Trained griffons are in short supply. If your griffon dies, you must wait until a new mount can be located for you by the Order. This typically takes around 30 days, but this period can be longer or shorter, at the GM’s discretion. Importantly, griffon knights who are given a replacement mount are expected to provide a viable griffon egg to the Order in return.

HIGH IN THE SADDLE

At 3rd level, you gain advantage on saving throws and ability checks to avoid falling off your griffon. You also gain the ability to cast the feather fall spell once per day, using Charisma as your spellcasting ability.

At 7th level, you learn the following special aerial combat maneuvers, named after the knights who invented them. You must be mounted on your griffon to use these maneuvers. You can use more than one maneuver per turn, but you can only use a single maneuver on an attack. Once you’ve used a total of five maneuvers, you must take a short or long rest before you can use any of them again. Starting at 15th level, you gain an additional use of your maneuvers between rests, and again at 18th level.

Blackfeather’s Fury. When a creature hits you or your griffon with a melee attack, you can use your reaction to make a melee weapon attack against the creature. If you hit, add an extra d8 to your weapon’s damage roll.

Sir Andros’s Daring Flyby. When you make a melee attack, deal an extra d8 damage if you hit, and neither you nor your griffon provokes an opportunity attack when moving out of your opponent’s reach before both your and your griffon’s turns have ended.

Hammerschlag’s Forceful Charge. When you hit a creature with a melee attack, your attack does an extra d8 damage, and if the target is size Large or smaller, it must make a successful Strength saving throw (DC 8 + your proficiency bonus + your Strength modified) or be knocked prone. A mounted opponent that’s knocked prone is also knocked off its mount.

At 10th level, you gain the Deadly Swoop aerial combat maneuver. In addition, the extra damage die rolled when using a maneuver becomes a d10.

Sir Ector’s Deadly Swoop. While mounted on your griffon, you can make a devastating dive attack. You must begin the move at a higher point than your target and you must move at least 30 feet straight toward the target before the attack. You and your griffon make your attack rolls with advantage, and you add 1d10 to the damage for each attack that hits.

At 18th level, the extra damage die rolled when using a maneuver becomes a d12.