Skip to content
Home / Delve into the Depths in the Kobold Blog / Welcome to Midgard: Khanate of the Khazzaki 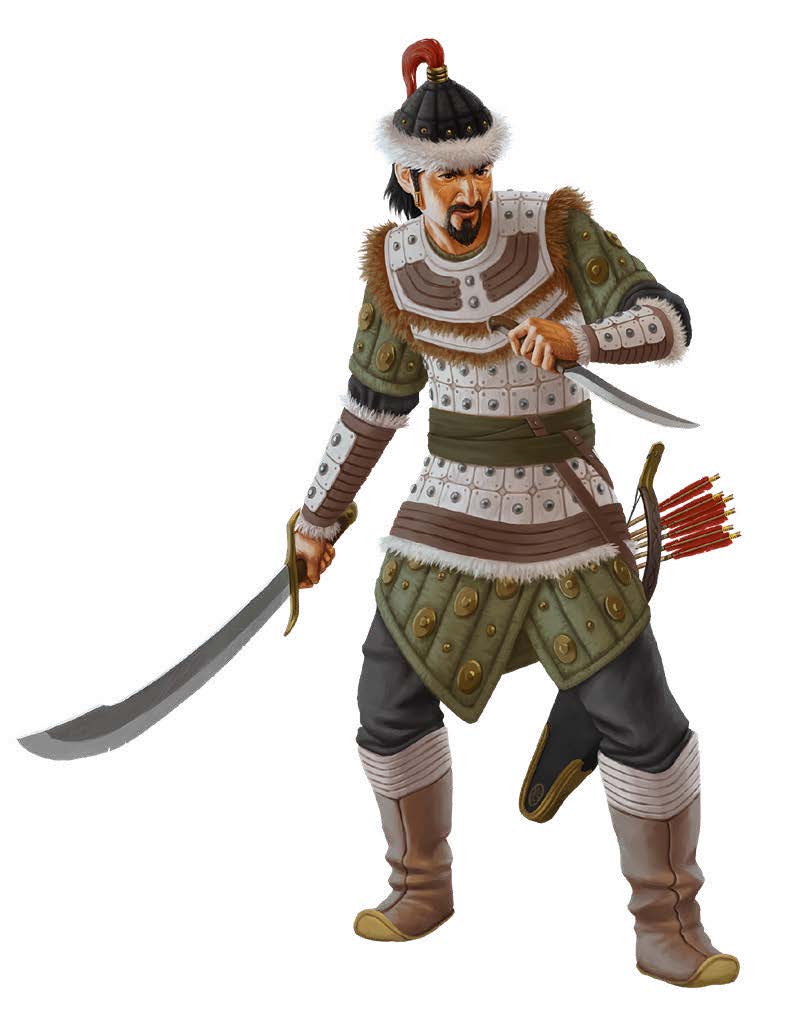 The Plain is filled with human nomads who call themselves Khazzaki. They are followers of Svarog and Khors and Perun and Sweet Golden Lada, though Svarog is their patron. Their cities are built of tents and flesh and rope and the people are often driven from their chosen site before the wind, but they are no less formidable for that. Their master, the Khan of the Khazzaki, rules from the City of Wheels. His nation stretches wherever hoof beats thunder, from the Cloudwall to Far Cathay.

The riders, tribes, and khans of the Khazzaki are a mixed lot: adventurers and raiders, nomads and centaurs. Anyone who swears fealty to the khan is welcome in their tents, and guests are honored for a night even in deepest winter. They ride to war over frozen fields, their ponies small but fast and incredibly tough, like their riders. Indeed, the horses of the Khazzaki are never shod except when they must leave the Plain, and they rarely do.

The current Khan of the Khazzaki is Bodhan Zenody, an archer, a rider, a scholar, and a man of infinite cunning and artful compromise who has ruled for almost 20 years. He is now ready to consider a great toss of the dice, a run at looting one of the great nations such as Cathay or Khandiria in the east, the Mharoti in the south, or the rabble of Niemheim or the Magdar in the west. He commands an army, his generals are tested and loyal, and the shamans and outriders tell him that the Khazzaki are perhaps a bit lazy, in need of a test.

Bodhan Zenody does not rest easy. If he gambles and fails, one of his three sons will surely take the title of Khan of Khans. The adventurous life of the Khazzaki is a sword dance away from complete collapse, and yet his people trust him to lead them to glory.

The chief inhabitants of the Plain are the Khazzak Brotherhoods, nomads descended from an unlikely mix of Northern raiders, ancient steppe dwellers, and Kariv nomads. They have no cities and live as roving horse and ox herders, and occasionally as farmers. They are free wanderers and adventurers, unlike the serfs and slaves of Reth-Saal or Vidim.

To the north are the Plains of Rhos Khurgan, land of the red mounds, burial sites of an ancient race. The Khazzaki roam these rolling hills and grasslands east of the Nieder Straits, though their range extends south to the Ruby Sea. Here wild horse clans pour libations of blood and wine over ancient barrows, honoring dead heroes and Svarog the Rider, their patron god.

The southernmost section of the Rothenian Plain is a larger region where the Khazzaki travel to get away from the “settled” region of Rhos Khurgan. The open lands of the Khanate include a few small taiga forests, many rolling hills and gently sweeping rivers, and an endless supply of grass. They end to the south at the foothills of the Dragoncoil Mountains, where the Mharoti city of Kaa’nesh is a home of ogres and dragonkin who despise the free-riding Khazzaki bands.

The khan has repeatedly tried to capture the city, and repeatedly failed. The Mharoti have sent one army out into the grasslands against the Khazzaki. The tribesfolk consider it a point of pride that Kharalang the Wind Dragon slew the army’s drakes, and the Khazzaki riders harried the Mharoti infantry all the way back to Kaa’nesh, shooting the last few retreating edjet within sight of the city walls.

No second army has yet been assembled to tread upon the Khanate’s tall grass.

For each stone cup of wine they drank, they poured two atop the nearest mound. The dissonant horns and strings of their victory song echoed over the silent burial sites—whose stones were as red as blood, even in the moonlight.

Tucked away in the northern territory of the Khanate, near the banks of the Tanais River, are the red mounds of Rhos Khurgan. The mounds total 31, though a single similar mound stands a dozen miles east of the larger site—this outlier mound is built on the shores of a small lake and fouls the air for a half-mile around it. The Khazzaki stay away from the 32nd mound entirely, believing it to be cursed.

Each mound consists of compacted earth and red shale stones arranged to form a dome roughly 15 feet in diameter. The mounds appear to have had an entrance on their southern edge, but these passageways collapsed years ago. Though their components are entirely natural (rock, earth, grasses), they have stood up well against the elements. They also resist magic that would disturb them. The mounds are burial sites to a lost and forgotten race. Protected by the Khazzaki, the mounds have never been excavated, though some recovered bones suggest the buried were tall humanoids.

The Khanate considers the red mounds to be a sacred site, visited only after a successful raid or campaign. The Khazzaki celebrate their victories among the mounds, drinking, singing, and thanking their ancestors. It is considered customary to offer the mounds drink during these celebrations, and casks of wine are often emptied into the parched soil of the mounds. Refusing to offer the mounds a drink is one of the greatest offenses one can make against the Khazzaki, and those who deny the mounds their portion are buried alive nearby.

Divine magic is warped and changed in the region where the mounds are built. Clerics, paladins, and other spellcasters who derive their magic from the gods find it difficult to choose spells while resting within a mile of a mound. Despite their most ardent prayers, these casters find their spells chosen for them—a selection intended to offer only defense.

A typical encampment of the Khazzaki includes 100 to 300 men, women, and children, with a family of friendly centaurs as allies and auxiliaries. These centaurs are called the kin ludi, or the horse friends, of the clan. The Khazzaki believe that Svarog creates centaurs out of his most deserving human followers. These camps are entirely mobile and rarely stay in one place long (even in winter, the steppes ponies can survive on forage from beneath the snows). They wander widely in the summer grazing and raiding season, and journeys of 100 or 300 miles are considered no great hardship, a matter of a few days’ ride.

At the end of summer, all Khazzaki camps send emissaries to pledge their fealty to the khan at Misto Kolis, and to prepare for winter and spring raids. Their ability to fight in the snows makes them extremely dangerous, and all the Khazzaki’s neighbors know better than to relax their watch at the first snowfall of winter.

Misto Kolis, the City of Wheels

Moving across the Plain on the back of creaking carts, the City of Wheels is the Khanate’s nominal capital and main trading center, as nomadic as the people it serves. Most of the city is made up of palatial orgoo (massive pavilions) and collapsible buildings of light wood that can be packed onto wagons or pack horses when the city roves.

Famed for its wrestlers, jugglers, jesters, and other entertainers, the city frequently appears to be one giant drunken party—although much trade and diplomacy goes on quietly amid the drink and games. Families come and go, but the city is heavily influenced by the Khanate’s Woolen Palace and by the Kariv Leanti family, ruled by Clan Mother Lumenita Leanti in the Kariv style, especially when the khan is raiding. There are more Kariv gathered here than anywhere else, although the city’s population fluctuates wildly.

The disease that is affecting the horses of Trombei and the centaur hordes of the Plain has also spread to the horse and pony herds of the Khanate. For now the khan has managed to keep the disease from wiping out his stock of horses, but the speed at which the disease spreads poses a challenge. Animals afflicted by the disease are slain and burned, their ashes buried deep under the wild flowers and sage brush.

Very recently, the khan has allied with a strange order of Perunian druids. These overly tall and spindly limbed humans shuffle across the Plain in suits of armor made from woven grasses. They gather in groups of seven, never less and never more—living in one communal grass hut built so low they must stoop to enter. They speak the Common tongue, but communicate among each other in a rustling, clicking language all their own. The identities of these druids are kept secret; their faces are hidden inside sinister masks made from sticks and grass. Everywhere they walk, the natural order slides sideways. Though their magic adds to the khan’s power, they hate the kin ludi centaurs, and the khan seeks a way to end this enmity. The khan hopes that the druids will offer a cure for the black strangles, the strange withering disease that threatens his prized pony herds.

None know their purpose or their origin. For now, they are content to heal the khan’s wounded and worship the ferocious electric storms that tear across the Plain…