Skip to content
Home / Delve into the Depths in the Kobold Blog / Grand Duchy: Exotic Felines of the Domain 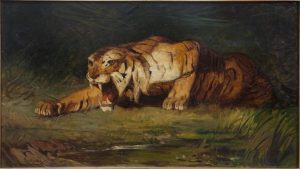 The elves and elfmarked of Dornig have an affinity for felines, yet are wary of them all the same. House cats, especially mousers, are preferred. But exceptional felines serve as familiars and animal companions. Leopards, panthers, and catamounts are admired for their agility and stalking prowess. The noble lion occupies a place of honor upon Grand Duchy’s heraldic crest.

Even so, the Grand Duchy also is home to a variety of exotic felines, some monstrous or magical in nature. Here is a sampling—all derived from the Pathfinder Roleplaying Game Bestiary 3—that might be found in the vast wilderness of the Grand Duchy of Dornig:

The cat lord Vontega Kottur is one of several animal lords rumored to inhabit and guard sections of the great forests of the Grand Duchy. Vontega’s usual range is east of the Neurabon River and north of the River Court, though he does not always confine himself there. Although humanoid, Vontega prefers to roam in the shape of a catamount. Because the cat lord is such a daunting presence, there is much folklore and suspicion about him among the common folk.

A small community of catfolk may—or may not—exist along the shore of the Leukos River. Their existence is whispered of, but not proven. There are tantalizing clues, perhaps enough to entice an expedition. But in the great cities of the duchy, the catfolk are thought of as mythical creatures, a part of folklore, but no more than that. Some believe, however, that the catfolk are the creation of arcane experiments conducted among wizards along the border with Magocracy of Allain. Others believe they are the last remnant of sentient felines that fled the destruction of the Lost Arbonesse long ago.

The shira is among the Wasted West’s most feared creatures. They are sometimes drawn north into the southern reaches of the Arbonesse to hunt and feed. These 10-foot tall creatures, the corrupt spawn of genies, are usually solo hunters. Sometimes they are employed as scouts for a horde out of the Wasted West.

A curiosity from far-flung lands. These foo lions are descendants of creatures once kept in Courlandia menageries, but were long-ago freed. The foo lions remain, in spite of the area being outside their normal habitat, because they seemingly have an affinity with or attraction to the barony’s dragon queen.

This colossus with a lion face, perhaps singular in nature, is suspected to hail from the haunted lands of giants in the far western Pytonne Mountains. It guards an expanse of ruins—what was perhaps an abandoned elven city—near the heart of the Arbonesse Forest.

Actually far more numerous than once thought, these magical creatures with snakes protruding from the back of a large leopard prowl the innumerable underground lairs and dungeons that lie beneath castle ruins across the duchy. A polar variety of kamadan have been encountered by Dornig sailors in the icy lands across the Nieder Strait, then transported back at the bidding of unscrupulous mages.

These small, primordial felines hunt in small groups akin to a destruction of feral cats. They are found on islands in the Nieder Straight, including the Isle of Berserkers, perhaps a last remnant of their kind that once roamed the Lost Arbonesse. Some of the Imperatrix’s scientists think their behavior and place in ecology is akin to that of hyenas.

These magical creatures occupy the same territory in the forest northlands as the large amur tigers. However, the nue are cruel and intelligent, capable of possessing spell-like abilities that are used to torment victims’ nightmares before striking. A malicious creature, nue have been known to intimidate lesser races into doing their bidding.

It is perhaps the strangest feline terror in the wilds of the Grand Duchy. Several dozen of these feline-shaped constructs, engraved with strange markings, may have come from the lands beyond the western oceans when the great elven empires existed. Magicians and princes used the taotieh as guardians.

3 thoughts on “Grand Duchy: Exotic Felines of the Domain”