Skip to content
Home / Delve into the Depths in the Kobold Blog / Memoirs of a Lich: Foreshadowing, Part 1 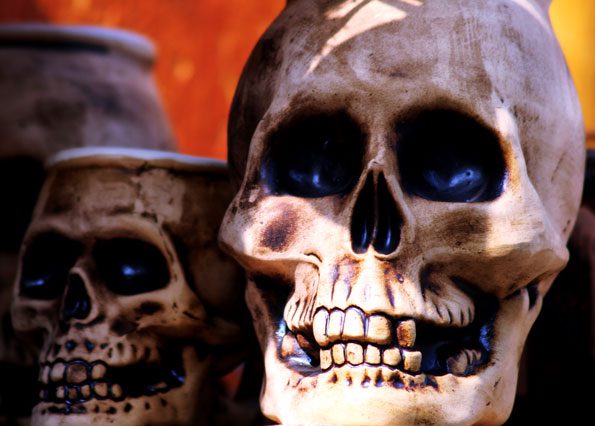 This is Osvaud. Let’s say you’ve put time and effort into erecting the perfect deathtrap. The protagonists run through your maze of horrors like well-armed rats, finding you within the center. You let loose a villainous laugh and throw the big switch on a gigantic technomagical gizmo with tons of cool special effects. You start monologuing about how it’s going to simultaneously make you a thousand feet tall and turn a god into an inside-out starfish.

Then, readying for the climatic fight, you notice exactly how confused your audience looks.

Crap. You forgot to foreshadow.

There are two big aspects to foreshadowing, and I’ll handle this as a two-parter.

The first is establishing early-on to poor-attention span protagonists that you are the Big Bad. Amateur villains might leave a bunch of notes, murals, and terrified witnesses around… all testifying to how awesome they are with melodramatic exposition. The problem with these approaches (beyond the obvious) is it makes your coolness a detached and theoretical thing.

Like any good service-industry professional, it is always way better to connect on a personal level.

My favorite is letting them fight a minion who “seems” crazy scary. Like, they don’t need to actually be anything special, and anyone can feign impressiveness for a few minutes with the right preparatory spells or mystical one-shot doodad. The good guys will eventually triumph but only with a cautious sigh of relief.

Then you show up, throw out a line like, “You’ve failed me for the last time!” and incinerate the disposable henchperson in some brutally effortless manner. This works great because it establishes you in perspective against the chump who gave them a run for their money (and also makes you seem super evil).

Now you occasionally get a bunch of bards yammering about tropes instead of appreciating the effort required to deliver a classic, solely for their benefit. You hear these jerks coming a mile away because they ache for excuses to complain while you’re doing all the heavy lifting. You can use the same general idea but need to cloak it in a little mysteriousness.

Don’t seem to show up and start murdering. Instead, make yourself every bit the distantly epic villain. Be invisible with a huge illusion of yourself overhead. It can be all ominous and speechifying while you surreptitiously melt the minion’s face off.

Maybe dominate this fall guy minion of yours, but don’t take over until they are hosed. Step in, and act out a “struggle for the body.” Then speak in a super-deep and scary voice about how you’ve “devoured their soul” as the price of failure. Don’t forget to name drop yourself. Consider talking in the third person if you can’t casually slip it into normal conversation.

Or… stick with the classic, but make the murder so memorably awful with cold-hearted dialogue sufficiently tight—it doesn’t matter how often they’ve seen a similar scenario. Like, temporal stasis the monster in a brutal moment of agony and say, “Your suffering shall continue long after the last star darkens.”

This one is especially nifty because it’s not like you can’t thaw them out an hour later or something.

2 thoughts on “Memoirs of a Lich: Foreshadowing, Part 1”