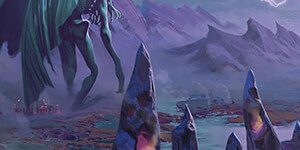 From the Pillars of Uxloon to the fields of Verrayne, from Flensing Gulch to the Silk Thicket, you have wandered countless leagues of the Western Wastes. You know its seasons, its savagery, and even some of its secrets all too well. Warped, decaying energies and dark memories of the trials of survival in that alien desolation linger, sometimes still displaying their influence on mind, body, and soul.

The term “wastelander” refers to any of the vagabonds, ascetics, and drifters sometimes seen to wander the Western Wastes, scavenging solitary, nomadic existences from its wilderness and the ruins of its strange and diverse cultures.

Sadly, the wastes foster many of civilizations’ cast-offs: the banished, the insane, the runaways and self-exiles in various shapes, sizes and… states of mind.

Were you an “out-skirter,” a scavenger, furtively shadowing caravans and armies or prowling the fringes of civilization? Were you a young fugitive from a dust goblin slave camp now semi-feral from the horrors of vendetta and survival amidst the madness of the wastes?

Perhaps, you are a misunderstood visionary, a heretic, now counted among the wandering, waste-scarred pariahs. Or did darker, older forces, compel you into the wastes? Forbidden lore, untapped energies and elder artifacts have long drawn the brave and the foolish into the Wasted West. Some rise to dark enlightenment and glory; most plummet to insanity and death.

Variant Languages: Goblin, and a number of Dust-Goblin dialects, equal to your INT modifier. 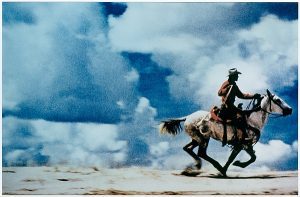 All Int(Arcana or History) checks made by you regarding the Western Wastes (Great Old Ones, Vril technology, wasteland Ley-Lines, and such) are made at advantage.

Additionally, as an expert at skulking, scrounging, and spying among ash-dunes, petrified forests, and cyclopean, spell-scorched ruins, you do not suffer disadvantage due to dim light, sand, or dust storms, wind, or rain when making Wis (Perception) checks that rely on sight or hearing. You may attempt Hide while only lightly obscured.

While operating within the boundaries of the Wasted West (or similar arcane apocalypse), you are considered to be proficient in the Nature, Stealth, and Survival skills.

For a deeper look into the arcane desolation, elder gods, and sorcerous city-states of the Wasted West, be sure to check out the Midgard Campaign Setting.

1 thought on “Wastelander: A Background”