Skip to content
Home / Delve into the Depths in the Kobold Blog / Warlock’s Apprentice: Terrors of the Dragon Empire 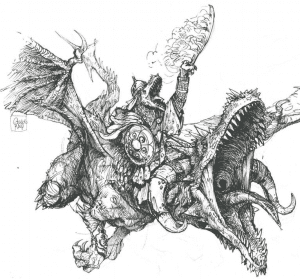 The Mharoti Dragon Empire is the scourge of Midgard and the Southlands alike. The vast armies of the Dragon Empire march relentlessly across the known world in their endless wars of conquest, spreading fear and chaos wherever they go. The creatures that make up the Mharoti forces are powerful and frightful, ranging from deadly kobold ambushers mounted atop camouflaged drakes to elite companies of the finest dragonborn warriors ever seen. Feared by the Mharoti and their enemies alike, these are the terrors of the Dragon Empire.

Kobold ambushers also employ stealth to deadly effect, preferring to lay in wait for hours or days at a time. Ambushers also typically operate in units of ten or more, using their numbers and their pack tactics to devastate their targets even after the initial ambush. While these advantages make them formidable combatants even without the element of surprise, these lightly armored kobolds rarely try to salvage a failed ambush, preferring to scatter in all directions and meet up and a predetermined rendezvous point.

Camouflage drakes are squat, sand-colored quadrupeds with tiny, vestigial wings incapable of lifting their muscular forms. Despite lacking the ability to fly, these drakes can change color to blend in with their environment, and can run as fast as a horse at its top speed. These bestial creatures lack the shrewd cunning of true dragons, but are still intelligent enough to work in perfect tandem with their kobold rider.

Cunning Action. On each of its turns, the kobold scout can use a bonus action to take the Dash, Disengage, or Hide action.

Skirmishing. The kobold scout deals an extra 14 (4d6) damage whenever it hits a target with a weapon attack on its turn, and has moved at least 30 feet that turn. This includes movement made while mounted.

Stealthy Traveler. The kobold scout can move stealthily at a normal pace while traveling overland.

Assassinate. During its first turn, the kobold ambusher has advantage on attack rolls against any creature that hasn’t taken a turn. Any hit the ambusher scores against a surprised creature is a critical hit.

Camouflage. The kobold ambusher has advantage on Dexterity (Stealth) checks made to avoid being seen on a turn in which it has not moved. If it does not move for at least 1 minute, it cannot be seen unless directly interacted with. This effect ends if the ambusher moves.

Pack Tactics. The kobold ambusher has advantage on an attack roll against a creature if at least one of the ambusher’s allies is within 5 feet of the creature and the ally isn’t incapacitated.

Read more on kobolds and other Mharoti terrors—and read other great articles—in Warlock, only on Patreon!