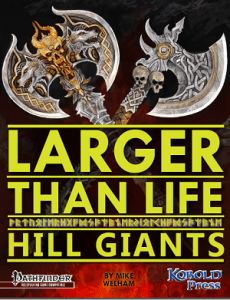 Hill giants don’t make world-dominating plans, but that makes them no less terrifying to their victims. Concerned mainly with finding food and shelter, these giants quickly consume all the game in their territory and start wandering into human settlements looking for easy prey—or enter service as shock troops for dragons and other, cleverer giants.

Give your players a titanic new challenge with Larger Than Life: Hill Giants today at Paizo and at DriveThruRPG!