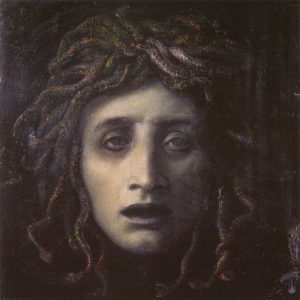 For centuries, rangers from the Queen’s Wood have traded rumors of a blighted fortress built from hundreds of thousands of petrified sacrifices. It is here that the half-tarrasque hydraic medusa serpent queen is said to dwell, reigning over a court of snake cultists drenched in the blood of displacer beast young.

Believed to be an icon in her own right, the serpent queen is the progeny of the tarrasque and the first hydra, who in turn laid the eggs that would hatch into the first seven medusas. According to legend, her stronghold materializes in the midst of elven kingdoms that let the passage of time erode tradition, though if any elves have survived such a calamity, they have not come forward to tell of it.

Ochre plates of chitin reinforce the emerald-colored hide of a towering hydra. Each of the beast’s five heads bears a medusa’s face and snaky hair, and their segmented eyes cast down upon a gallery of crumbling petrified warriors. An iron crown wrought in the shape of a coiled serpent rests atop each head.

Snaky hair +12 vs. AC (5 attacks) – 20 poison damage.
Natural even hit: 10 ongoing damage (save ends).
Natural 16+: The serpent queen may make a tangle of petrifying gazes attack as a free action.

[Special Trigger] C: Tangle of petrifying gazes +12 vs. MD (up to 5 nearby enemies) – 20 psychic damage, and the target must start making last gasp saves as it turns to stone.
Limited use: 1/round.

[Special Trigger] Roar of the tarrasque +12 vs. MD (1d3 nearby enemies in a group) – 50 thunder damage, and the target is dazed (save ends).

Reflective armor plating: When a magical attack targets the serpent queen, the attacker must roll a natural 6+ on the attack roll. Otherwise, the attack hits one of the attacker’s allies instead (determined randomly).

Tarrasque invulnerability: When the serpent queen is reduced to 0 hit points, it does not die, but rather discorporates, regenerating after 1d10 days. The serpent queen can be slain only in battle if it is wounded at least once by a magic wand crafted by a demon of 7th level or higher.

When the half-tarrasque hydraic medusa serpent queen is slain, the PCs may claim the following rewards in addition to any treasure they would normally earn.

Sersa Victory is the founder of SVD Press, a small group that publishes deathtrap dungeons for D&D, Dungeon World, and 13th Age. Among other titles and curses, Sersa was named Apprentice of Acererak by Chris Perkins and Monarch of the Monsters by Kobold Press readers. His adventures, including Revenge of the Iron Lich and Fane of the Heresiarch, laid the foundation for the genre that would be known as fourthcore.