Skip to content
Home / Delve into the Depths in the Kobold Blog / Monster Mayhem: Killer Turtles 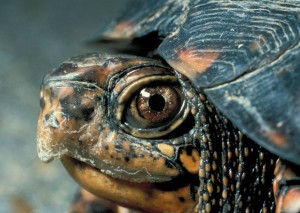 From beneath the murky waters it creeps ever closer to you, its unsuspecting victim. In mere seconds and with surprisingly little splash, it snags you and draws you beneath the surface. You have no time to react, and suddenly, you’re struggling for breath beneath it’s iron grasp. How long can you hold your breath? A minute? Two? It can wait.

The deep swamps are home to a number of carnivorous species of giant turtle. These turtles are uniformly aggressive and generally attack anything that wanders into range of their powerful jaws.

Nature DC 12: Giant carnivorous turtles are often called “snappers” because of their beak-like jaws and the speed at which these jaws can close around unwary prey. Snappers dwell in swamps where the murky water can hide their bulk, allowing these slow-moving brutes to ambush prey.

Nature DC 15: Swamp snappers are large, aggressive swamp-dwelling turtles that are infamous for their incredibly powerful jaws. A swamp snapper’s beak is nearly impossible to open once it slams down on an unfortunate victim; even death cannot loosen a swamp snapper’s grip. Lizardfolk sometimes train swamp snappers to serve them in combat.

Nature DC 20: Giant snapping turtles are behemoth, carnivorous turtles that lurk in deep swamps and impenetrable bogs. Their immense jaws can easily remove limbs and they are greatly feared for the lightning speed of their ambush attacks. Giant snapping turtles have a very thick, spiky shell that is almost impervious to physical damage and their long necks can propel their head and jaws forward to surprising lengths. Powerful monsters such as black dragons and nagas sometimes train giant snapping turtles to guard their lairs.

+11 vs. AC; 2d6 + 4 damage, and the target is grabbed (until escape); the swamp snapper cannot make bite attacks while grabbing a creature, but it can use inescapable jaws

Grabbed target only; 2d6 + 4 damage, and the target takes a cumulative -1 penalty to all skill checks made to escape the grab, up to a maximum penalty of -5 (no attack roll required)

Tactics
A swamp snapper attacks with its clamping bite, and when it has a solid grip on its target, it is nearly impossible to dislodge. Aggressive to a fault, a swamp snapper will not release its prey even if bloodied or slain.

[M] Shearing Bite (standard; at-will)
Reach 2; +18 vs. AC; 3d6 + 6 damage, and the target is grabbed (until escape); while grabbed, the target takes a –2 penalty to AC and Fortitude defense; the giant snapping turtle cannot make bite attacks while grabbing a target, but it can use dismembering jaws or shredding claws

[m] Dismembering Jaws (standard; recharge on 5, 6)
Grabbed target only; +16 vs. Fortitude; 4d6 + 6 damage, and ongoing 10 damage and the target cannot use attacks or powers with the implement or weapon keywords (save ends both); a creature hit with this attack is no longer grabbed

Withdraw (immediate reaction, when first bloodied; encounter) ◊ Healing
The giant snapping turtle pulls its head and limbs into its shell and regains 53 hp; while withdrawn, it gains resist 15 against effects that target AC and a +4 bonus to all defenses, but cannot move or attack; it can emerge from its shell as a minor action

Tactics
A giant snapper turtle hides in deep, murky water and attempts to ambush prey. Once a creature moves within 2 squares of its position, it surges forward and uses shearing bite to grab hold of its target. Then, once it has a firm grip, it drags its target into deep water where it can tear it to pieces with shredding claws or inflict a debilitating injury with dismembering jaws. When a giant snapping turtle is bloodied, it pulls its head and limbs into its shell to recuperate. While withdrawn, its incredibly thick shell makes it almost invulnerable to physical attack.

Swamp snappers and giant snapping turtles are usually solitary creatures, but they are sometimes encountered with intelligent, swamp-dwelling humanoids and monsters.

Don’t you see? On the land, in the water, they’re gonna get you. There everywhere, man! Any last words before they get you? We want to hear them below.