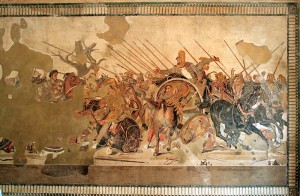 A rocky shape bursts from the ground in an eruption of bloody mud. Broken weapons jut from its massive body, and shards of shattered helmets encircle its head.

The strifeborn ravager is an elemental spirit corrupted and driven mad by the death and destruction of large-scale battle. Already impressive in size, truly gigantic specimens could exist if the battle that spawned it were expansive enough.

Strifeborn ravagers are rare, and the conditions under which they come into being are not fully understood. Some sages speculate that when a summoned earth elemental is on the verge of destruction during a large-scale battle and its summoner is killed, the elemental plunges into the ground and is driven mad by the carnage around it. This, of course, is difficult to prove. No matter its origins, the strifeborn ravager exists only within the boundaries of a specific battlefield. Attempts to communicate are met with nonsensical battle cries and the creature’s best imitation of screaming mounts and warriors.

Battlegrounds of any age can host a strifeborn ravager, and the creature endlessly patrols the area in search of intruders. These battlegrounds are picked clean of weapons and armor since the creature scours the place and incorporates these treasures into its body. Solitary and insane, it attacks anything it detects, defending against all who would enter.

Once the strifeborn ravager senses intruders, it waits below ground until they move deep into the battlefield so they cannot easily escape. The creature’s first action when it emerges is often to trample as many foes as it can at once, its rocky body momentarily taking the shape of a group of charging cavalry. It frequently splits its attacks between foes as the combat continues. If any combatant appears to be a more difficult foe, the strifeborn ravager focuses its attention upon that individual as the air rings with mimicked horns.