Skip to content
Home / Delve into the Depths in the Kobold Blog / Trapmaster: Spike-Eating Pit Trap 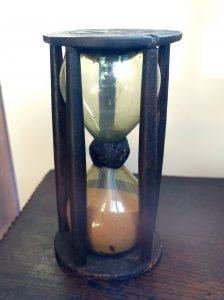 Brushing the flakes of rust from her hands, Mira reached into her pouch and withdrew a wooden spike. Glad now that she had paid the druids of the grove to enchant it, the young rogue carefully tapped it into the seam of the pit trap ahead, ignoring the statues of horrific creatures awaiting her at the end of the corridor…

At the far end of the 10-ft-wide corridor, six stone monsters flank a door, the heads of each of the fantastic creatures regarding the door. Their eyes, fashioned from precious gems, sparkle in the presence of the smallest amount of light. The lower half of each statue appears rotted away. Pitted and crumbing stone hide gives way to likewise corrupted stone muscle and bone. An oversized hourglass dangles from the vaulted ceiling, 12 feet above the stone floor.

At the threshold of the passage, an inscription above the archway reads:

Their eyes turned toward the onward way, they did not see time’s swift decay.

The near end of the corridor has also suffered at time’s hand. The flagstones have lifted and set like poorly maintained cobbles. This damage reveals what might once have been a cunningly disguised pit trap: the seam in the floor is clearly visible.

Close examination of the seam reveals ancient flakes of rust. An aura of strong necromancy radiates from the monstrous statues, focused on the decayed nether regions of the statues and connected to the black sand in the hourglass.

The decor and aura serves as misdirection, seeking to draw multiple creatures into the hallway before the trap triggers. The pit trap is easily spiked, but such spikes pierce the tough hide of an alchemically preserved rust monster corpse. Metal rusts away in 4 rounds, the decay hidden until the last moment: only careful observation provides any warning. As the spikes crumble into flakes of rust, the pit trap springs.

The hourglass pivots in a bracket, draining sand into the lower chamber when the locks on the far door are tampered with. Examination of the timepiece (even before the pivot triggers) reveals that if held parallel to the floor, the sand will not drain into either chamber. A medium or small creature standing on the shoulders of a medium creature can reach the device; using a pole or other object to “disarm” the pivot requires a steady hand.

False Bypass: Manipulating the hourglass with a pole or similar device requires a DC 15 Dexterity or Disable Device check, success is automatic if a creature steadies the glass with its hands.

Metal spikes decay in 4 rounds; a creature specifically watching them spots the rust at the end of the third round. Wooden spikes, unless reinforced in some fashion, snap after three Medium or Small creatures enter the corridor. Stone spikes or similar materials disarm the trap automatically. When un-spiked, the trap functions as any other pit trap.

*The rust monster membrane must be identified to allow a disarm check against it, otherwise a creature believes spiking the pit is sufficient.

10-ft.-by-40-ft. Pit Trap. Spotting the rust monster membrane is a normal task, identifying it is a hard task, and the fall from the trap deals hard damage against multiple targets.

10-ft.-by-40-ft. Pit Trap, 40-ft. deep. Success on a Delicate Tasks check spots the rust monster membrane; dwarves examining the crack succeed 4 times in 6 to identify it as an organic component rather than stone. A 3d6 Intelligence check identifies the membrane (2d6 if it is tested with some sort of metal implement). If un-spiked, the pit triggers on a 1–2 in 6 when a creature crosses the threshold, and automatically when three or more creatures enter the hall (which also snaps wooden spikes). The fall deals 4d6 falling damage, 3d6 Dexterity check halves.