Skip to content
Home / Delve into the Depths in the Kobold Blog / Trapmaster: Path of the Barefoot Mariner 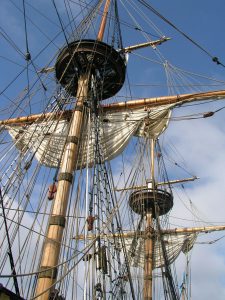 Mira smiled fondly at the inscription inscribed onto the leather flap on her tool pouch as she returned the magnifying glass:

Grand-daughter, may these tools grant you the blessings they once brought me, though the paths you seek to walk are dark and fraught with ancient perils. The traps you encounter will most definitely be of the old school.

Setting aside the ship-in-the-bottle, the young tomb robber sat down in the corridor and began removing her shoes and socks, a quirky smile played at the corners of her mouth…

Three rows of mixed surfaces (5-ft.-by-10-ft. sections of burning coals, beds of nails, and sand) are separated by 5-ft.-long sections of flagstone, the second divider slick with moisture. Magical auras permeate the corridor.

A ship-in-a-bottle rests on a stand in front of the first row. The ship’s name—Barefoot Mariner—is barely readable on the tiny transom, magnified by the convex end of the bottle. Tiny writing also appears on the sails: illegible without magnification. Breaking the bottle to use the end as a magnifier destroys its value as an art piece. The inscription reads:

Twice escaped from storm and sea

’twas shipwrecked sailor’s destiny.
Outward bound did track on shore
Bloodied, burned, yes! Gravely sore.
Homeward bound, tossed upside down,
reversed did he grasp his chance, clean and free.
As newborn babe, reborn was Jack
And all were glad to have him back.


Safe passage sees a barefoot creature crossing over the hazards and traps in this order: bed of nails, burning coals, then sand. Once across, the treasure may be recovered or the journey continued through a door in the far wall.

Stepping into the end of the hall arms the triple trap for the return journey with an audible click; all squares in the first row now serve as triggers. The coals remain safe in row two; the pit trap in row three is avoided by walking across on clean hands. Grasping the sand  automatically reveals the buried bypass switch for the triple trap. Engaging the bypass releases the locks on the other sand traps, allowing fallen creatures to be recovered.

A wind trap in line with the third row awaits climbing, jumping, flying, or levitating creatures. 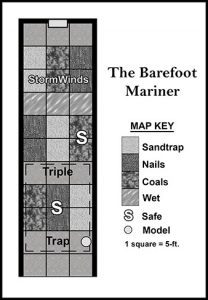 The second flagstone divider and walls are wet: Climb DC +5; jumping creatures must make a DC 16 Reflex save or skid into the trapped section of corridor in their line of travel.

Effect +10 melee (1d6 piercing damage; speed reduced by half for 24 hours or until target is successfully treated with a DC 15 Heal check, or receives at least 1 point of magical healing), shield, armor, and deflection bonuses do not count; footwear grants a +2 armor bonus to AC.

Trigger location; Reset none
Effect combined effects of traps and hazards (2d6 falling, 2d6 fire, and 1d6 piercing damage plus speed reduction); DC 20 Reflex avoids; multiple targets (all targets in a 15-ft.-by-40-ft. area including the 5-ft. sections of corridor on either side of the first row.

Hazards and pits, if not discovered by player investigation are DC 25 to spot and deal setback damage. The nails reduce walking speed by 10 feet until the creature regains 1 hit point. The triple trap combines all three as above, and its bypass is discovered with a DC 30 check or automatically when walking on one’s hands. A Dexterity Saving Throw DC 15 avoids sand traps, the triple trap, skidding on the wet flagstones and halves fire damage from coals (shod feet also halves fire damage). Climbing the walls is a DC 20 Strength (athletics) check; the wet portion grants disadvantage. The gust of wind (DC 15 Strength check) from the stormwinds trap fills the entire width of the corridor.

Pits and hazards are Hard challenges dealing minimum single target damage (the triple trap combines all three sets of damage). Creatures hobbled by the nails make a speed check to move at full speed each round until healed (Normal check) or regaining 1 point of damage. Climbing the walls is a Hard task, as is avoiding skidding on the slick flags. Moving against the stormwinds, or climbing the wet walls is Ridiculously Hard.

Pits trigger on a 1-2 in 6 (2d6 falling damage, save avoids). The triple trap triggers on a 4 in 6 and deals all three sets of damage as above (save halves). Burning coals deal 2d6 fire damage, the nails 1d6 and require a 3d6 Dexterity check to avoid being hobbled at half speed (regaining 1 hit point cures). The walls can be climbed normally, except where wet. Here a 4d6 dexterity check avoids slipping (or skidding) on the wet surface. A 3d6 Strength check allows a climbing or flying creature to progress against the stormwinds.

6 thoughts on “Trapmaster: Path of the Barefoot Mariner”