Skip to content
Home / Delve into the Depths in the Kobold Blog / Midgard Maps: The Lady of White Rose Manor (page 6) 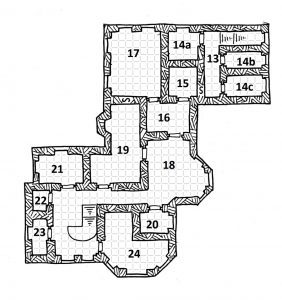 The remains of a four-poster bed lie scattered around the room, and tattered, moldy tapestries hang from the walls. Someone has swept a pile of old ticking from a shredded mattress into the fireplace. The room is otherwise unfurnished.

Encounter. Anyone coming within five feet of the fireplace will be attacked by the Swarm of Rats nesting in the ticking.
The secret door in the western wall leading to Area 17 can be found with a DC 18 Intelligence (Investigation) check. It is neither locked nor trapped.

A thick layer of dust covers the plain furnishings of this bedchamber. A large shuttered window dominates one wall.

This room contains an old, moldering bed, a small table, an empty wardrobe, and nothing else of note. The shutters on the window are nailed shut.

A thick layer of dust covers everything in the room. Next to an old bed, a table lies on its side, and across the room, an old wardrobe appears to have been moved away from the wall, its door hanging half-opened.

A successful DC 15 Intelligence (Investigation) check locates a long scratch on the inside of the wardrobe door, ending in a fingernail embedded in the wood.

This small room contains a very old, collapsed bed and the remains of a small table, splintered and scatted around the floor. A large, dark stain on one wall begins about two feet from the floor and extends down to the floor, where it spreads out into a long-dried pool roughly three feet across. The top of the stain is in the shape of one side of a man’s face, and even the lips of the wide-open mouth and the edges of teeth can be discerned.

The sky-blue tiled walls and floor of this room are nearly spotless and surprisingly free of dust. Four wooden bathing tubs sit evenly spaced along the center of the room. Several wooden pegs jut out from the walls nearest the tubs with towels hanging from them. Sponges and brushes rest on short tables next to each tub.

This room still sees some use from Lady Ilinca or her occasional guests, usually after a messy mealtime. A black silk robe lies folded on top of the farthest tub-side table from the door. One of the robe’s pockets contains an iron key that fits the secret door beneath the stairs in Area 2.

Three rows of long, wooden pews face the windows of this dark-paneled chamber, and another three rows of shorter pews behind them face the same direction from the rear section of the room to one side. Long, thick curtains cover the windows. Several tall candelabras stand in the corners and flank the central window.

Behind one curtain, a stained-glass window depicts the likeness of Yarila, elven-featured, her long white hair woven with flowers and a rain of seeds falling from her outstretched hand. The second curtain conceals another such window, this one bearing the image of Porevit, his green eyes, green hair, and flowing robe of leaves a striking shade of emerald. He holds a cluster of red grapes in one hand and a spear in the other, leaves growing from its shaft.

There is nothing magical about these windows, but they still have some effect. If they are uncovered and visible to Lady Ilinca, she will suffer disadvantage on attack rolls and saving throws. These are the gods of Ilinca’s family, and seeing them is the only thing capable of filling her with remorse. She also fears their eventual judgment.