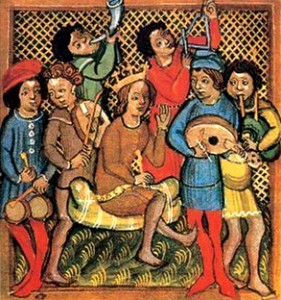 Often confused with lay minstrels, fireside storytellers and scoundrels, the troubadour is a highly skilled chronicler of events, an orator, a counselor, and a musician. Relying on his or her ability to weave a convincing story, morality play, or sonnet, the troubadour is often seen among the upper crust of society. The adventuring or wandering troubadour has added many survival skills to an already formidable set of talents, making this character a much sought-after addition to any adventuring party.

The troubadour is compatible with either Swords & Wizardry or Labyrinth Lord core rules.

Attack and Save Rolls: As thief

Shield and Armor Restrictions: Padded or leather armor only

Weapon Restrictions: Can use only 1-handed weapons

The total amount of the bonus is dependent upon the troubadour’s class level.

Tools of the Trade. A troubadour also has the following skills as a thief of the same class level: Move Silently, Climb Walls, Hide in Shadows, and Hear Noises.