Skip to content
Home / Delve into the Depths in the Kobold Blog / The Madman at the Bridge: An Adventure at PaizoCon 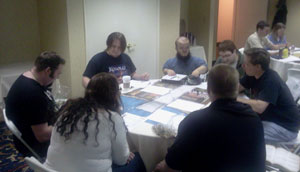 The situation was dire! The great Puffing Bridge drawbridge that connects eastern and western Zobeck had malfunctioned. Worse yet, the clockwork guards in the area were attacking anyone trying to get near the gatehouse. The kobold workers in the ghetto would be late for their jobs in the mines and workshops if something was not done, and done fast. Read more about this adventure beyond the jump.Sensing gnomish treachery at work, the kobold elders decided to send in their highly trained elite commando team to pacify all resistance and get the bridge down. Briefed by the kobold commander, the intrepid team stormed the bridge, defeated the clockwork minions, cut down the mad firebombing human, humiliated the ogre ballista crew, and invaded the gatehouse where the rotting heart of gnomish diabolism was at play. Needless to say, they triumphed over evil and disabled the boiler before it destroyed the entire dock.

All hail the scaly heroes of Zobeck!

I had a great time running Wolfgang’s fun convention romp, and all the players were in fine form, embracing their small but fierce commando team members and enjoying many laughs as they outfought and outwitted their foes.

3 thoughts on “The Madman at the Bridge: An Adventure at PaizoCon”