Skip to content
Home / Delve into the Depths in the Kobold Blog / Booth Report Day One: Hoist the Banner! 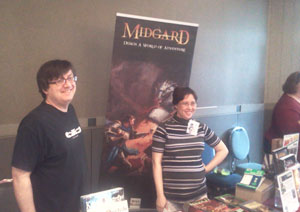 The Kobold Quarterly booth was loaded with new releases—Complete Advanced Feats, Streets of Zobeck, Northlands, and Lost City come to mind—and with kobold staffers chatting about what’s new and where Pathfinder is headed. The Midgard banner got some compliments, and the freebies were popular (no surprise!).
We also had some ashcans (preview versions) of the Book of Drakes sourcebook by Adam Daigle and Mike Welham. They were signed special versions printed up just for the show, and they are extremely limited. And the signed editions continued with Complete Advanced Feats signed by Sigfried Trent and copies of Sunken Empires signed by Brandon Hodge (signed with tentacles!). Read more beyond the jump.

Mostly, we talked to friends old and new, as one does at a booth. Burl Zorn stopped by (from the TSR days). Dan Carew of the L5R heyday said hello. Dozens of new fans and regulars, freelancers, and newcomers chatted, picked up author copies, and generally were friendly. Designer Logan Bonner took some of the booth crew out to a BBQ lunch with Stan! and Stephen Radney-MacFarland. Artist Guest of Honor Tyler Walpole stopped by to sign up for the Kobold Courier free newsletter (and you can too—see the black box to the left). Really, it was a very fine day.

At the end of it all, the stacks of books got a lot smaller. A few new friends became patrons (one of whom is an expert on gypsy lore who might share that knowledge in the Midgard patron project). And overall, it was just what a convention should be: a meetup of gamers, new game books, and new subscribers. Plus we have some plans for new KQ articles, new campaigns, and perhaps a new campaign or three. The kobolds come to shows not just to sell fine gaming wares, but also to meet new gamers, new artists, and new friends. Success!

1 thought on “Booth Report Day One: Hoist the Banner!”