Midgard Tales — the most epic adventure anthology to date for the Midgard Campaign Setting — has arrived in hardcover!

We invited some of the most creative game designers working today to create adventures that would define the Midgard setting, with locations that range from the magic-warped West to the gloriously savage eastern steppes.

And they delivered big! Midgard Tales is a 196-page anthology of 13 Pathfinder Roleplaying Game adventures for characters level 1 through 11 that your players will be talking about for years. You can get it today at the Kobold Store, DriveThru RPG,or Paizo.

In Midgard Tales, your band of adventurers will: 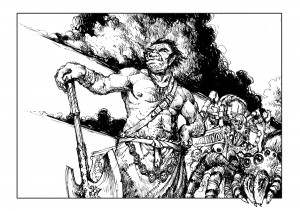 Here’s what you’ll find inside: