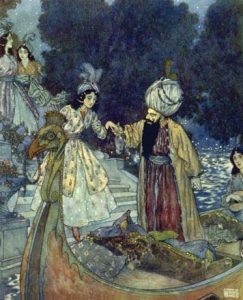 An unfortunate habit exists in the world of tabletop gaming; we’re sometimes unable to separate the name of a class (which is just a convenient handle to describe a certain package of abilities), with the actual character who has levels in that class. For example, while clerics are servants of the gods, nowhere does it say in their class description that they must be a part of an organized religion. The samurai could just as easily be called the knight, and the ninja could have its class name changed to the spy, and it would not affect the mechanical abilities of these classes, or the kinds of characters who have levels in those classes.

Nowhere is this assumption that the name of the class limits the kinds of characters you can play more common than with the rogue.

It’s all in the name, really. Just hearing the word rogue makes you think of someone who defies the norms of society. A sort of punk rock avatar who doesn’t have to follow your rules. There are also gamers who started with older editions of fantasy RPGs for whom there was no rogue; there was only the thief. The result is players who assume this is character class who skulks in the shadows, picks pockets, and disables security systems—and who is typically driven more by greed than by heroism. Even our ideas of what rogues should look like fit a certain assumption; graceful, dexterous figures in dark clothes who appear suddenly to stab you in the back.

While you can play a rogue that fits that description, that’s only one interpretation.

Perhaps the biggest assumption that comes with rogues, though, is that they’re neutral at best, and chaotic at worst. However, just as there’s nothing stopping a rogue from being a big-bellied bruiser with a cudgel, there’s also nothing that restricts a rogue based on alignment. So, while you’re perfectly allowed to play a bastard who engages in skullduggery and has a busted moral compass, you’re also allowed to bring someone both lawful and good to the table if you choose to.

A rogue is a character with a certain set of skills that he or she has acquired over an entire career, which can make them a nightmare to people who sit behind gaming screens and nonplayer characters who think they’re safe behind their dungeons, traps, and legions of monsters.

In fact, the rogue really is one of the most varied classes in terms of what they can be built to accomplish. Because they’re highly skilled, rogues can be literally anything. For example, a rogue who supports the law might be a brilliant detective who uses the power of her mind to catch criminals for the City Watch. Maybe she has a badge, or maybe she’s an independent troubleshooter, but when the case gets bloody and the clues don’t add up, she’s who the city turns to. We see a version of this in Paizo’s adventure path The Curse of the Crimson Throne, and it’s used to drive the plot for an entire book and change!

There are more options than simply cops and criminals when it comes to rogues, though. Perhaps your rogue is a reformed burglar, who puts his skills to work to steal powerful relics and dangerous artifacts from evil cults who would put them to dangerous use? Maybe your rogue is a hard-nosed enforcer who has climbed the ranks until he has become the local lord’s personal problem solver, handling everything from quelling riots to preventing assassination attempts. It’s even possible that your rogue is a legitimate locksmith who travels with adventuring parties specifically because they need a security expert. Your rogue could be an archaeologist, delving into ancient tombs with the permission of the current government to uncover the treasures of the past. Or, in particularly corrupt principalities, you might be the leader of a revolution attempting to undermine wicked lords to bring about change that benefits the people instead of tyrants.

The sky really is the limit. Just remember that skills by themselves are neutral. Do you sneak into heavily fortified castles to assassinate the king, or do you do it to rescue hostages being held for ransom? It’s all about your goals, your motivations, and how you choose to invest your abilities.

6 thoughts on “The Lawful Good Rogue”