Skip to content
Home / Delve into the Depths in the Kobold Blog / The Kobolds Go Adventuring: Saturday Gaming at PaizoCon 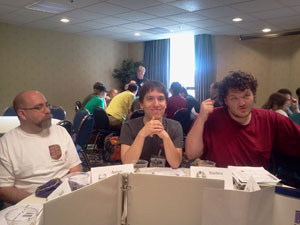 Saturday at PaizoCon. You can hear the dice rolling. The Kobold GMs gather groups of players around them, and the fun begins in three different adventures. GM Adam Roy took his two sets of players through adventures called “Redcloak Ruckus” and “Grandmother’s Fire,” and Sigfried Trent ran an adventure called “Gravebinder’s Daughter.” You can see pictures and read about notable moments in these sessions beyond the jump.

In “Redcloak Ruckus,” Adam’s first adventure of the day, the party escaped the collapsing inn, only to follow the kobold wrecking crew into the rioting Kobold Ghetto. In the ghetto, the stalwart adventurers vanquished the kobold antipaladin Gnomesnatcher and his pet basilisk, Rusty, then defeated a huge steam-powered clockwork myrmidon. Unfortunately for the party, the undead mad scientist kobold boss escaped while they fought the automaton. Well, there’s always next PaizoCon! 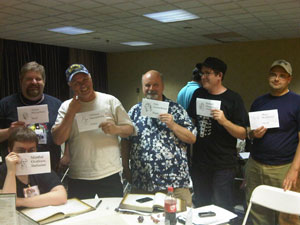 Next up for Adam came “Grandmother’s Fire.” Just to be safe, you might want to finish drinking whatever beverage you have at hand before reading further. (Maybe take a look at the picture of the crew from “Gravebinder’s Daughter” as you do so. It’s conveniently posted right here. See?)

9. I got one of those “Would you like to be ‘enlarged'” animal messages.
8. She has a monkey on her back. No, really. It’s her familiar.
7. [Barbarian to bard] This is why I can’t take you anywhere nice.
6. I am rubbing restorative ointment on you…slowly.
5. I’m out of ideas…I throw a rock. ::Epic Fail::
4. I like encounters with a happy ending.
3. Dude, where’s my caravan?
2. It’s really hard to “high-five” a paralyzed rogue.
1. I’m not using her as a human shield! I just don’t want those groddy (sic) ghouls to muss my beautiful blonde elven hair!

Are you at a loss for what to run for your next gaming session? Why not check out The Lost City or Streets of Zobeck while you’re here and consider using either for your next session.