Skip to content
Home / Delve into the Depths in the Kobold Blog / Monster Monday: Ossein Giant 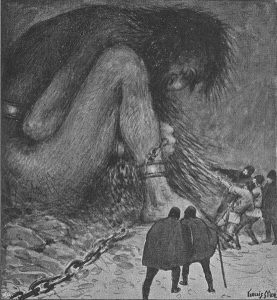 This statuesque giant has tan skin. Its hair is braided into a ponytail, and jewelry made of bone adorns it.

Ossein giants are sometimes referred to as bone giants. By using their mental abilities, these giants can manipulate their own body structure. When threatened, they use the ossify skin ability, but they find it much too cumbersome to use outside of combat.

Ossein giants stand 24 feet tall and weigh approximately 12,000 pounds. They have brown hair and most have tan colored skin, but dark brown skin is not uncommon. Some wear jewelry made from the bones of their prey, and most prefer to braid their hair behind them into intricate patterns, winding creatures carved from bone among their braids. These giants can live to be 700 years old.

Most ossein giants are nomadic. They follow large, herd animals, such as dinosaurs. Dinosaurs not only serve as a decent meat source to the giants, but they also provide tough hides and large bone structures that are useful for making tools and equipment. Some ossein giants view themselves as shepherds of dinosaurs, and in these cases, they domesticate and train dinosaurs as mounts.

SPECIAL ABILITIES
Ossify Skin (Su) As a standard action, an ossein giant can transform its skin into dense bone. It gains damage reduction 10/bludgeoning, a +5 bonus to natural armor, and light fortification. The ossein giant’s speed is reduced to 20 feet and it cannot run. It gains a +4 enhancement bonus to Strength and a –2 penalty to Dexterity. The die damage for slam attacks becomes 2d8. The ossein giant can transform its bone back to skin as a standard action.

Tactics
Ossein giants are expert hunters. They track prey with psionic scent and sneak up close using their chameleon and touch sight abilities. Thousands of years of hunting have made ossein giants skilled ambushers and very experienced at coordinating attacks in combat.

Habitat and Society
Because most ossein giant tribes move around a lot, tribes do not interact with each other very often, though sometimes they agree to meet every couple of decades to trade goods and information as well as to find mates for young members. When formally joined with a mate, females join the tribes of their husbands. These intertribal marriages do not result in strong bonds between tribes since it might be decades before two tribes encounter each other again. Also, because tribe members must rely on one another for survival, a new mate quickly develops a kinship with its new tribe.

Ossein giants do not believe in ownership of land, but they view the herd they follow as theirs. They aggressively defend their herd from other would-be predators. Although these giants avoid other humanoid settlements and do not seek out conflict, problems can arise if they travel through an unsettled region claimed by a local government that gets perturbed at their presence.