Skip to content
Home / Delve into the Depths in the Kobold Blog / Tips from the Kobolds: Improvisation & Game Mastering 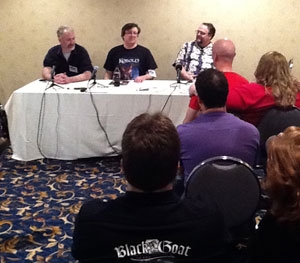 Three intrepid kobold panelists joined forces at PaizoCon to discuss the topic of improvisation and game mastering: Adam Roy, Wolfgang Baur, and Jeff Grubb. What did these three masters have to say? Let’s start with something basic: Improvisation (or “improv,” as some say) is how you deal with a situation for which you weren’t prepared, such as when your players do something unexpected. And now, to learn some tips for improvisations, plus read a few examples, continue reading beyond the jump.

When an adventure goes off the rails, don’t say no. The answer is always “yes, and…” deliver the consequences. If the party wants to open the door that clearly leads to instant death, run with it. With the above in mind, Wolfgang noted the following: “Saying ‘yes, and…’ gets harder and harder the dumber and dumber the party gets.” Following the “yes, and…” technique can also lead to stories that players remember for years after the game.

An example of long-lasting memories: One of Wolfgang’s groups decided not to go down into the volcano caldera where the lost city lay, but instead stayed on the volcano rim. On a whim, Wolfgang said, “Well, that’s where you encounter the flying monkeys.” He ended up improvising a whole backstory for this tribe of flying monkeys, and to this day his players refer to his lost city adventure as “The Flying Monkeys Adventure.”

In terms of using improvisation to encourage roleplaying and deepen character interaction, Jeff proposed giving each PC a piece of a puzzle and a reason not to share it with the other characters.

To illustrate how “yes, and…” can lead to some interesting character development situations, Adam, who was in a Forgotten Realms campaign, described how he once chose to roleplay a character from a society notable for paladins and slaveholders. He asked the DM if he could be a lawful good slave-owning paladin. The DM said, “Yes, and….” The result: Adam’s character, which many DMs would have rejected out of hand, ended up bringing a lot of richness to the campaign.

Jeff then brought up how a simple player question can lead to world building on the fly. For example, the player of the paladin might ask what god he or she should serve, and let’s say you haven’t given much thought to the pantheon yet. When you answer that question at that point, you commit to a fact about your world (this god exists, and its paladins must behave as follows) for as long as you run that campaign. “I’ve come up with some really interesting gods as a result of this,” Jeff said. In fact, the merchant god of the Forgotten Realms came into being when someone wanted to play a cleric who worshiped money.

An audience member asked about a situation where a player wanted to improv with the GM in a way that changed the rules by introducing new magic powers. Ultimately the other players felt the character had become overpowered, resented it, and forced the player out of the group. Jeff said one of the rules of his campaign is a willingness to try something new, and a willingness to remove it from the game if it doesn’t work out.

Another question came up: How do you mitigate the level of improv you do in a published setting like Golarion, where it might violate something that’s afterward declared canon. Wolfgang answered, “My rule of thumb is to go ahead and do it, and I’ll fix it later. I’m not going to hold up my game while I flip through sourcebooks, unless it’s for something really important. It’s the publisher’s job to worry about canon.”

The panelists agreed that a handy improv tool is to have some “shticks” prepared beforehand so that if you make a mistake while improvising, you can get things back on track. Wolfgang described a campaign where, whenever things went badly off the rails, the GM would say, “You see something shiny in the corner.” That instantly became the party’s focus.

At times like those, Jeff said he would introduce a cranberry salesman who would show up and drop clues. Adam used a wacky group called the Brotherhood of the Chinchilla. You can also introduce an inn, a treasure map, or an ogre encounter to serve either as a distraction to the party to keep you from drowning, or as something that helps the party regroup and move forward.

Another GM tip: To help get a session started, a note-taker among the players can help them determine their next steps when the group meets again. If you don’t have one, offer a bribe, such as additional XP for their character.

All in all, this seminar provided players and GMs alike with some ideas and stories to further improve their improv abilities, help make fun memories, and aid in the development of character and setting details and backstory.

To see more pictures of the convention, plus take a look at past articles, hop over to “The Kobolds Have Arrived: PaizoCon 2011” right now.

2 thoughts on “Tips from the Kobolds: Improvisation & Game Mastering”