Skip to content
Home / Delve into the Depths in the Kobold Blog / Tournaments: The King and Queen of Sharps 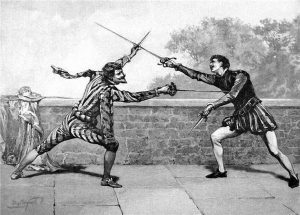 You can never trust the faces presented to you in the twisted alleys or on the colorful promenades of the city. The smiling merchant might be weighting the scales, the richly dressed woman might live in a mean little room, and the harmless beggar may be nothing of the sort. If you know what to look for, though, you can tell the hawks from the popinjays. The young woman with her hair in curls and her round cheeks cut by a smile might look harmless, but the sword hilt at her hip is a clue to who she really is. The sweeping hand guard, with the exquisite silver vines wrapped around it, declares her a Queen of Sharps, and one of the deadliest fencers in the entire region.

The King and Queen of Sharps

Tournaments are as old as the arts of combat themselves, and no two of them are alike. One of the most famed and fast-paced, though, is the King and Queen of Sharps. Unlike in most melees, where warriors fight in armor while wielding blunted weapons, participants in the King and Queen of Sharps fight in their shirtsleeves with weapons honed to a razor edge. The goal isn’t to kill your opponent, though, or even to wound them. No, the goal is to slip past your opponent’s guard and to make precision cuts in his or her garments to prove your skill. Blood points are counted for those skilled or lucky enough to score shallow cuts along a limb or the face, but wounds severe enough to hamper an opponent’s ability to fight are counted against your final score. In all but the most extreme circumstances, killing an opponent disqualifies you from the tournament, rather than allowing you to win the bout.

Fighters who enter the King and Queen of Sharps compete in single-elimination bouts. They may use whatever weapons they want, which often leads to interesting pairings. A master of the rapier dueling a dagger-wielding rake is far from an uncommon sight, and fighters have used weapons as varied as spiked gauntlets, morning stars, spears, and spiked chains. As long as the weapon bears a “sharp” that can pierce the skin or dig a dueling groove, it’s fair game for a competitor to use. Because, when all is said and done, it’s not about the weapon; it’s about the mastery and control of the fighter wielding it with such precision.

To the Victor Goes the Spoils

The winners of the tournament, the King and Queen that it’s named for, receive more than citywide fame and accolades. Although the tournament is open to the public, and the matches are watched by hundreds, if not thousands of people, it’s nothing compared to the victory celebration. The King and Queen are saluted by the judges, and often by previous champions, who promise that each victor will gain a symbol of their victory: a unique weapon made specially for them.

For some champions, those weapons are symbols of victory. For others, though, they’re tools to be used. In fact, someone might enter a tournament wielding one of these “royal weapons” as a way to intimidate an opponent. The slightest flinch can make a huge difference in the King and Queen of Sharps, and if you’re squaring off against a former King or Queen, then that moment of hesitation may be all it takes for them to score a cut along your cheek to remember them by.

The King and Queen of Sharps in Your Game

If you have a player who wants a unique background to go along with a special weapon, then declaring the character a former King or Queen can carry some serious gravitas. The same is true if you introduce an NPC with a royal weapon, and the bard realizes that it isn’t just any swordfighter the party’s heavies are trying to intimidate. You could also use the tournament as a backdrop for your campaign, introducing important NPCs who are either watching the matches, or participating in them. In terms of story hooks, perhaps the PCs are trying to win the tournament or are attempting to figure out a plot such as someone trying to rig the event. Or maybe the PCs uncover plans to murder someone who has joined the ranks with a “slip of the wrist” as the cover-up for the crime.