Skip to content
Home / Delve into the Depths in the Kobold Blog / Full Sleeve Midgard: Variant Gauntlet Witches for Dragonkin and Gnolls (Part 4) 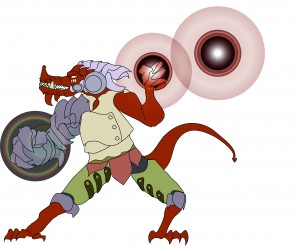 The gauntlet witch archetype first appeared in Kobold Quarterly #23, offering a vibrant alternate option for playing a witch. This article details the dragonkin and gnoll racial variants of the gauntlet witch in Midgard.

Trained in hidden fortresses in the Dragoncoil Mountains of rugged Kalpostan, the feared scaleclaw witches form an important part of the great dragon Mharot’s bodyguard and not-so-secret security force. Made from supple steel overlaying the specially treated hide of traitorous dragons or (it is rumored) drakes grown for the purpose, a dragonclaw gauntlet evokes fear and wonder in all but the bravest souls. In Mharoti, scaleclaw witches are respected as much as they are reviled.

A scaleclaw witch’s dragonclaw gauntlet has the following modifications:

Semi-sentient: A dragonclaw gauntlet is only semi-sentient—a precaution taken by Mharot to ensure his minions are not swayed by greater intelligence or knowledge. Unfortunately for him, this has led to more than a few scaleclaw witches leaving his service unannounced. (Mharot currently works to imbue dragonclaw gauntlets with a subservient, trackable essence).

A dragonclaw gauntlet does not confer the alertness, lore, legend lore, teleport gauntlet, or toughness abilities.

Draconic Hide: A dragonclaw gauntlet covers only the hand, arm, and shoulder of the scaleclaw witch, affording protection equal to leather armor. At 1st level, the scaleclaw witch may choose an additional form of energy. The witch gains resistance 1 against that energy type.

Additionally, each level of armor training allows the scaleclaw witch to increase the protection of the dragonclaw gauntlet—covering the upper body with medium armor equal to hide at 8th level and a much more comprehensive suit with heavy armor equal to banded mail at 14th. Due to the magic nature of this armor, the maximum Dexterity bonus and armor check penalty are treated as if the armor were made of mithral (in other words, the maximum Dexterity bonus increases by 2 and armor check penalty is reduced by 3).

Eldritch Clawstrike: The sharp claws of the dragonclaw gauntlet inflict 1 extra point of piercing damage in addition to the 1d6 crushing damage of a painclasp attack. Additionally, at 5th level whenever the scaleclaw witch succeeds with the eldritch clawstrike, the witch may elect to channel arcane power into the attack instead of causing staggering or paralyzing effects. The witch imbues the attack with the effect of any 1st- to 3rd-level spell with a range of touch and with an elemental type (air, earth, fire, or water) the witch possesses. The spell is expended as normal. This ability otherwise functions as pain clasp.

Improved Eldritch Clawstrike: As eldritch clawstrike, but the scaleclaw witch can imbue the attack with 4th- or 5th-level spells. This ability otherwise functions as improved painclasp.

Cutting a swathe of peril across Khandiria and Ishadia, the fearsome half-kote witches are a force to be reckoned with among gnoll bands. The Despot of Reth-saal, already possessed of the ritual to create tattooed gauntlet witches, eyes the south hungrily, eager to capture a half-kote witch and learn the secrets of the feral power these witches have. Although seen as a primitive parody of true eldritch gauntlets, there is no denying the ferocity and barbaric prowess gifted to bearers of these wild objects.

A half-kote witch’s fetish gauntlet has the following modifications:

Constructed of tough hide plates of desert beasts and ensorcelled in ragged rituals of blood and sacrifice, the fetish gauntlet is rarely a beautiful object—sewn with gut-string, embedded with glass, beads, shell, stone, teeth, and talons and invariably daubed with blood, mud, and other less pleasant fluids. Finally, large tusks taken from large animals; onyx, ebony, or obsidian spikes; or the teeth, fangs, or claws of apex predators adorn the gauntlet as ferocious spikes. Fetish gauntlets are brooding, hungry beings with a yearning for power—they are known for overpowering their owners before reaching out for a new, more powerful witch.

Sapience: Although not exactly a very intelligent item, a fetish gauntlet is still sentient and has the same Wisdom and Charisma scores of a regular eldritch gauntlet. A fetish gauntlet’s Intelligence score starts at 8, and it increases by 1 for every 2 levels. It does not know any languages other than Trade and Gnoll, though it can be taught more once its Intelligence surpasses a score of 10.

A fetish gauntlet’s powerful and overweening Ego starts at 5, and it rises by one point for every half-kote witch level the gnoll possesses. Note that this affects the feral grip and improved feral grip abilities.

Empathy (Su): A fetish gauntlet communicates with its owner through empathy—this replaces the telepathy ability.

Scent (Ex): A fetish gauntlet has the scent ability to a range of 30 feet.

Lore (Su): A fetish gauntlet’s lore ability pertains only to Knowledge (geography) and Knowledge (nature). The fetish gauntlet does, however, provide the half-kote witch with a +2 bonus to Survival and Intimidate checks, and a +1 bonus to Stealth checks.

Feral Grip: A fetish gauntlet’s feral grip inflicts 1d8 crushing damage, and the victim is instead pinned. This ability is otherwise identical to pain clasp.

Improved Feral Grip: Due to a rough and imperfect interface, a half-kote witch receives a –2 penalty to ranged touch attacks made with her improved feral grip.