Skip to content
Home / Delve into the Depths in the Kobold Blog / The First Board Game I Fell In Love With: Mike Selinker 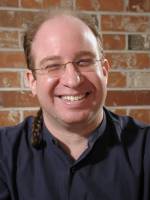 To celebrate the release of the Kobold Guide to Board Game Design, we asked some of the world’s top board game designers to tell us about the first game they fell in love with, and whether it still holds up for them today. Starting things off is author Mike Selinker.

For me, that’s easy: Squad Leader. I learned to play the original purple-box edition at age ten in the back of a glassblowing shop in Seattle. It was my first exposure to a hobby game—not the simple roll-and-move games of my preteen years, but a new kind of move-and-roll game. It’s amazing how powerful the inversion of those two concepts was. Roll-and-move was predestination, the game playing itself for me. Move-and-roll was strategy, the game bending itself to my will.

Okay, yeah, I’m sure I played Risk before that. But it didn’t capture me. It took until Hasbro asked me to write my own Risk game for me to really appreciate it. But playing Risk to make Godstorm and playing Risk to play Risk were two different things. I wanted something meatier. 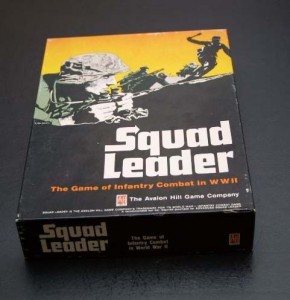 And I got it in Squad Leader. The game explored something I wanted to know more about—World War II battles—on a level that I could understand them. Each man, each tank, each leader mattered. If I lost even one guy, I might lose the game. The game brilliantly focused on one or two new concepts per scenario: first soldiers, then buildings, then sewer movement and armor support, and so on. Everything was bite-sized. I could play a scenario between school letting out and my mom noticing I hadn’t started my homework. We whipped through the 12 scenarios in the basic box, and waited breathlessly for Cross of Iron to come out and give us more.

As I look back on Squad Leader, though, I’m acutely aware of the one thing that was necessary to make me really enjoy the game: an adult to teach me the rules. With its “Rule 1.5.8” outlining, reading Squad Leader seems impossible now. Our brains rebel against this style of writing, as they are now used to more streamlined approaches. In The Kobold Guide to Board Game Design, I relentlessly mock sentences like:

2.2401 GUN DUELS: Vs a non-concealed, non-Aerial DEFENDER’s declared Defensive First Fire attack on it, a vehicle may attempt to Bounding First Fire (D3.3) its MA (/other-FP, including Passenger FP/SW) at that DEFENDER first, provided the vehicle need not change CA, is not conducting OVR (D7.1), its total Gun Duel DRM (i.e., its total Firer-Based [5.] and Acquisition [6.5] TH DRM for its potential shot) is < that of the DEFENDER, and the DEFENDER’s attack is not Reaction Fire (D7.2).

That’s totally impenetrable stuff. You can’t just drop a copy of Squad Leader off at a gamer’s house and expect them to learn it. Games want to be simple to understand, and Squad Leader is most assuredly not that.

But it’s still one of the best wargames ever published, maybe the best ever. Squad Leader taught me the skill of making decisions tactically, something I’m pretty good at now. Maybe someone in the current generation will gain that skill from one of my games. If so, they have Squad Leader to thank.

Mike Selinker is president of the Seattle design studio Lone Shark Games. Among the games he has co-created are Pirates of the Spanish Main, Harrow, Lords of Vegas, Unspeakable Words, Yetisburg, Key Largo, and Gloria Mundi. Prior to forming Lone Shark, Mike was a creative director and inventor at Wizards of the Coast, where he helped launch games such as Axis & Allies Revised, D&D 3rd Edition, Risk Godstorm, AlphaBlitz, the Harry Potter Trading Card Game, the Marvel Super Heroes Adventure Game, and Betrayal at House on the Hill. His puzzles appear in The New York Times, Games, Wired, and other publications, plus in events and alternate reality games.

6 thoughts on “The First Board Game I Fell In Love With: Mike Selinker”