Skip to content
Home / Delve into the Depths in the Kobold Blog / Real Steel: War Club 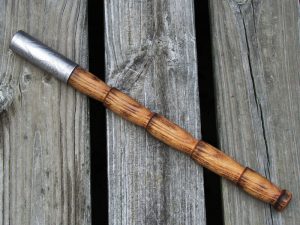 The war club, in the form of a stick, was probably the first or second weapon ever used by human beings—a rock also being on that early list. Although a stout hardwood branch can get the job done, many cultures have improved both the function and appearance of the humble bludgeon. Native Americans have given us a number of designs, ranging from all wood with a large heavy knob, to a rawhide wrapped stone on a wooden handle. The Celts gave us the burda, and the Zulu the knobkierrie.

This is Real Steel, after All…

The version of the war club featured here has a steel head, mostly because this is Real Steel, not Genuine Wood. There was no smithing involved in making this one—and just a little simple machining. It doesn’t technically meet the specs for any historical war club I’m aware of, but it’s close to a burda… 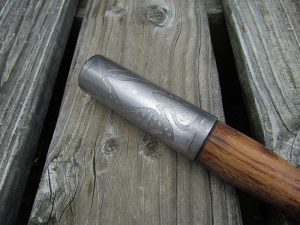 Get Your Head Wrapped Around It

The head of the club is simply a 4” long piece of 1” inside diameter mild steel pipe with 3/16” walls. The pipe was cut to size using a metal cutting band saw. I used an acrylic paint to create a mask, and then soaked the head in ferric chloride for about 2 hours to etch a deep pattern. A chemical stripper was then applied to remove the paint, and then I used a scotchbrite belt on one of my 2×72” belt grinders to create a uniform satin finish. I use the chemical stripper instead of the grinder to remove the paint because the woven scotchbrite belts are especially subject to clogging if misused, and paint is very gummy.

As Alex Putnam Once Said, “The Haft of It”

The handle is an 18” long piece of 1.25” diameter white oak dowel. I used a coarse belt on the aforementioned belt grinder to first thin the end where the head will slide over the handle, then to shape the repeating conical pattern, stepping down the grit to begin smoothing, finally finishing the sanding by hand with 220 grit. The wood was then scorched on the high points with a propane torch and finally sealed with two coats of teak oil. Oak is very hard and strong, but splinters are a problem, so it must be carefully finished. Torch hardened oak splinters are no joke.

The head is affixed to the haft three ways. First is pressure: I left enough meat on the handle so the head had to be forced on.  Second, I use the same two-part epoxy that I use to affix knife handles. Last, I drill completely through the assembled and epoxied head section and epoxy in a copper pin, the pin is then peened on both sides so it is thicker on the ends than it is in the middle. Peening also somewhat thickens the pin in the middle so it expands to fit tightly in the hole. The top of the handle was then ground off so it’s flush with the top of the head.

The modest club is the direct ancestor of the mace, morning star, and flail. We’ll be covering the mace and morning star in the near future. I probably won’t make a flail because they are exceedingly dangerous and difficult to handle safely—but we’ll see…

Let’s Talk About It

I’m really having fun making these for a couple of reasons. They’re quick to make and don’t require expensive materials or consume expensive resources. As a result of this, they allow me to offer them relatively inexpensively. In the near future, we can look forward to a contest featuring a steel shod war club—warm up your keyboards.

My favorite part of writing Real Steel is the discussion that follows. I’d like to see some links to various types of war clubs. There are lots of examples out there—let’s show and tell.