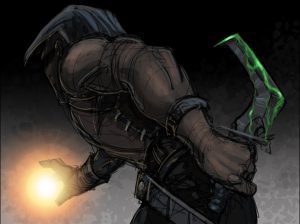 Legendary hexblade paragon path feature: Some of the rulers of the unfathomed depths below the earth have dwelt there so long that their bodies have become like the rock surrounding them. Occasionally, you can imitate them in order to help keep your foes from damaging you further…

Stone of the Unfathomed Depths (Legendary Hexblade Utility 12)
Your skin becomes like rock, keeping your wounds from closing. At the same time, the spikes protruding from you prove to be agonizing for foes that venture too near.
Daily • Arcane
Minor Action
Effect: You gain a +2 bonus to all defenses until the end of the encounter or until you end this effect as a minor action. While this bonus lasts, you cannot benefit from regeneration, and you take ongoing 10 damage that cannot be reduced in any way. Enemies that hit you with a melee attack or end their turn adjacent to you take damage equal to your Charisma modifier.

Legendary hexblade paragon path feature: As your power grows, the disease you transmit to your foes becomes more virulent and can eventually decimate an entire army if fortune favors you.

Legendary hexblade paragon path feature: Your likeness to the lords below is steadily growing, and you have reached the point of being able to assume their power unto yourself, if only briefly. Some of the lesser rulers may even fear that you intend to usurp them.

Underdark Transformation (Legendary Hexblade Attack 20)
You assume the very likeness of the bones of the earth, becoming attuned to your surroundings and joining to the ground beneath your feet.
Daily • Arcane
Minor Action                     Personal
Effect: Until the end of the encounter, you gain the following benefits:
◊ Tremorsense 10
◊ Immunity to poison
◊ Resistance to acid equal to 5 + your level
◊ If an effect would force you to move through a push or a pull (but not through a slide), you may move 1 square less than the effect specifies
◊ You can use the secondary power once per round

Underdark Transformation Secondary Power
Daily • Acid, Arcane, Implement
Minor Action                     Close burst 2
Target: Each enemy in burst.
Attack: Charisma vs. Reflex.
Hit: 10 acid damage, and the target takes a −2 penalty to all defenses until the end of your next turn.

Among the most feared denizens of the world’s greatest depths are the basilisks. Relatively few basilisks are allowed to reach their full maturity, as those that are fortunate enough to be born far enough away from surface dwellers to be allowed to live for the few hundred years necessary are likely to starve to death before attaining their full growth. Your master keeps one of the few such beings known and now trusts you enough to send it into your care for a time.

Greater Basilisk (Summoned Creature)
Large natural beast (reptile)
HP: Your bloodied value
Healing Surges: None, but you can spend a healing surge for the greater basilisk if an effect allows it to spend one
Defenses: Your defenses, not including any temporary bonuses or penalties
Speed: 8 (earth walk)

Minor Action • At-Will, 1/round
Effect: The basilisk either walks, shifts, runs, stands up, squeezes, or crawls.

Minor Action • Encounter
Effect: Until the end of your next turn, enemies within the aura that are immobilized or restrained gain vulnerable 15 all.

[m] Opportunity Action • At-Will
Trigger: An enemy ends its turn adjacent to you and within 3 squares of the greater basilisk.
Attack: Melee 3 (triggering enemy); your level +5 vs. Reflex.
Hit: 10 damage, and the target falls prone.