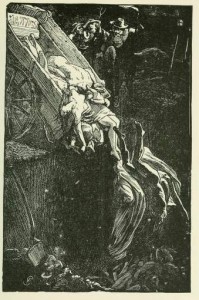 This is the story of how Vaszi outran Death.

Owing to the magic boots that he had stolen from a witch and to his steel-trap memory, Vaszi acquired the job of messenger. He ran from town to town, and at each stop, he repeated all the news he heard in his travels.

One day, Vaszi learned of a plague spreading through the region. He ran as fast as the magic boots would allow, telling everyone he saw of the epidemic. Upon reaching the last town on his route (his home town), he went into his basement and locked himself in.

At first, his neighbors mocked Vaszi’s cowardice, but when the plague reached his village, the disease steadily claimed the townsfolk. Vaszi heard their cries, but refused to leave his shelter. Eventually, the village fell silent...

In time, Vaszi left his basement. The scene before his eyes was distressing—townsfolk and animals lay dead in the streets. The worst part, however, was the sound of an approaching cart; it sent chills down his spine. Corpses lay upon it, and its hauler was skeletal and dressed in black robes.

Vaszi knew that he faced Death, yet rather than submit idly, he ran up and stabbed the grim figure with the witch’s magic knife (he stole that, too). To his surprise, the hauler melted in front of him, but the cart kept rolling forward, and Vaszi felt a pain in his stomach. He jogged away, ever looking back to see where the cart was. Still, the cart kept pace with Vaszi and even followed him ’round corners, so Vaszi quit looking back and ran as fast as he could.

Still, he heard the creak of the plague cart behind him. Soon Vaszi reached a muddy field outside the village. Perhaps it was the magic boots, or perhaps the speed that comes with fear, but Vaszi’s feet barely touched the ground. Not so the cart, its wheels quickly became mired. This mattered little to Vaszi who continued to run for his life.

Even after all these years, Vaszi still lives. He runs from town to town, lest Death ever catch up with him again. The cart, too, remains half-buried in the field, waiting for the day when the plague returns.

Before Combat Pushed by an illusory hauler, the pernicious plague cart disguises itself as a mundane, if macabre, vehicle.

During Combat When it senses a disease carrier, the pernicious plague cart attempts to subdue (or kill) that person with its aura. It uses its slam attack if the target proves resistant. When its target is helpless, the cart pulls his or her body into its carriage.

The cart ignores untainted characters unless they obstruct or attack it. It uses it slam attacks against such interlopers to reach its true target.

Illusory Hauler (Su) As a full-round action, a pernicious plague cart can create a visual figment of a Medium humanoid. Although it cannot exert force, the figment appears to push or pull the cart. The figment remains adjacent to the cart at all times. A successful attack against the figment (AC 10) destroys it.

Plague Acceleration (Su) A living creature infected with a disease (even if the disease is incubating) that begins its turn within 30 ft. of the pernicious plague cart must make a DC 14 Fortitude save for each disease it carries or suffer the daily effect of that disease. Success on the save does not count toward recovery from the disease. The save DC is Charisma-based and includes a +2 racial bonus.

Ecology of the Plague Cart

Plague carts are a common sight in disease-ravaged regions, where they carry away casualties lest the corpses infect others. Often burned after the plague runs its course, some carts remain, but they carry the stigma of death upon them. When this taint combines with animating magic, a pernicious plague cart might result.

A pernicious plague cart is a two- or four-wheeled wooden handcart roughly sized to carry several man-sized objects. Carved along its flank are images of dancing skeletons. To victims of disease, the skeletons appear to move along the surface. When the cart is adjacent a helpless character, the skeletons reach out of the panels to pull the victim into the cart.

A pernicious plague cart seeks out and disposes of plague victims, whether they are dead or not. If no disease is present, the cart may lie unmoving for many years, until disease spreads again. The animated cart is anathema to living things, but it might follow plague-spreading undead or outsiders.

No, no! It’s just a cough! Really, I’m feeling better. Any last words before the swine plague gets you?