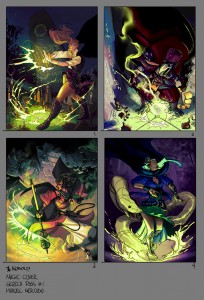 As we continue our celebration of the 10th year anniversary of Open Design, this time we venture into an artist’s studio with Marcel Mercado. Learn more about him and his work for Kobold Press.

Marcel Mercado brings a decade’s worth of experience working in video games. His cover illustrations are becoming synonymous with Kobold Press’s signature hardcover supplements. He provided the image of the spellcaster intent on a ritual incantation that graces Deep Magic and has produced a vivid image for the upcoming Tome of Beasts. He also provided several prominent illustrations for Hoard of the Dragon Queen and The Rise of Tiamat.

Q: A female wizard strikes a summoning circle with her staff while runes on a plinth flare with arcane power and the flames of candles sputter as magical energy is released. The cover for Deep Magic had to take roleplayers to a different, darker place than they were accustomed to. Can you share with us what went into making such a provocative image for one of Kobold Press’s signature products?

Marc (Radle, art director) contacted me for the cover, and he had expressed he wanted something lively and dynamic. He and Wolfgang (Baur) had shown me some of their characters and past work. Through our conversations, we settled on this idea of a ritualistic, practical approach to magic. I ended up with a lot of thumbnail sketches, then decided on tightening up my four favorites. Two featured the ley lines magic, one showed clockwork magic, and the last sketch was of a tiefling summoner. Marc liked the character from one sketch and the scene from another, so I made a fifth sketch with both elements combined. I got quick approvals, and proceeded to finish it.

Q: Tell us about yourself, Marcel. Where are you from? Where do you reside now? When and where did you receive your artistic training? What led you to become an illustrator? What is Bull Headed Studios?

I’m originally from Puerto Rico. From middle school to high school, I attended a specialized art school. There I got my earliest fine art training. I moved to the States, where I majored in computer animation at the Art Institute of Fort Lauderdale. I got into the video game industry, where I worked for almost a decade on many titles like Call of Duty, Dragon Age, and Borderlands. I made my way up to art director and then I decided to pursue a career in illustration. I choose that career because it was something I always wanted to do. I had been fortunate enough to find great opportunities over the years, but the time had come to work for myself. It’s been now four years since I took that leap; I am now in Atlanta, Georgia. I’m still doing freelance full-time. Last year, my best friend from my earlier video game job convinced me to create our own video game company, and we call it Bull Headed Studios. We’re working on our first title, which we plan on releasing later this year!

Q: Is it still a kick to see your work published, even though it might be weeks and months after you submitted it?

It never gets old. It always surprises me. Sometimes you just find out when the client sends your copy by mail. It’s always nice, ’cause I only get bills or junk mail, then you get this nice package, open it up, and it hits you.

Q: In Tyranny of Dragons, Kobold Press produced two adventure books for Wizards of the Coast. You provided many of the chapter illustrations, including the crow’s eye view of the Roadhouse, the good dragons responding to the summoning horn, and my favorite, the dream chamber of the Red Wizards of Thay. But it is your illustration of Rath Mordor that graces your Facebook page. Is Rath special to you?

I love painting humans. It goes back to seeing the old masters, portraiture, and such. With Rath, I was able to capture his contempt, and that expression just speaks volumes to me. I like painting story and movement on my pieces, but every once in a while, I like to do something that’s a bit quieter and subtler.

Q: Your interior work really evokes the feel and mystery of the Southlands, especially the Wind Djinn’s court, the god kings of Nurial Natal, and the victim in the clutches of the Demon Priestess. Did Southlands, a campaign book about an analog Africa, intersect with your personal tastes and interests?

Yes, when Marc approached me for Southlands, I was developing a story of my own. I grew up reading all the old myths and legends, from the Greeks, Egyptians, and Assyrians. But lately fantasy had been feeling shallow, in that everybody was pulling from the same slice of history and region. So the story that I developed was using some of these ancient myths and cultures as a springboard. When Marc told me about Southlands, I jumped at the chance because it was a way to put into images some of the things that I had researched for my story.

Q: Can you share with us how you came to be associated with Kobold Press? How does the creative process work with the art director and publisher—walk us through the back and forth? How is working with Kobold Press rewarding?

I remember a review on the website io9 came up about this new Midgard Campaign Setting book. It was my first year as a freelancer and I hadn’t gotten a single job to come in; I kept getting rejection letters in bulk. So I read this article, and I thought that sounds like the type of work I want to do. I checked their website out and saw they had a quarterly magazine with some great covers. I thought sure why not. That was around late October-November. Marc emailed me back by December that he wanted me to do a cover for a new book called Deep Magic.

Working with Marc and Wolfgang has been great. The biggest reason I keep working with them is I never feel like a monkey with a tool on my end. They’re sharp and receptive. It’s always a great collaboration. For me, that’s what I look for from clients. It allows me to not just give a final image, but also provide a service.

Q: Your process: What mediums do you work in? Where do you go for inspiration, or do you have an affinity for things fantastic and supernatural?

I work digitally; it allows me to work fast and keep my costs down. I’m easily inspired, and I’m always looking out for new things and experiences. I love the fantastical and supernatural. I grew up in a very religious environment, in an era where people considered everything “satanic” and so I got to see how images affect people. To this day, I still get some family members worrying over the work I do. I have to reassure them I haven’t run off and joined a cult or something.

Q: Monster books must evoke a sense of danger and peril from weird and wonderful creatures. You provided the dynamic cover for the Southlands Bestiary, but now Tome of Beasts is coming. Please talk about your role for Tome of Beasts.

Marc had given me the usual brief explaining the details and sense of the cover. He had also provided an image that he wanted the cover to sort of riff on; it was one of the old D&D images. The original image was sort of cramped, stiff, and confined to this cavern scene, yet you read the brief and it was just way more epic and grand. Marc and I just talked through it and in the end he decided it’s better to have a great image. I still kept the composition, and Marc had suggested to change the wizard and knight to their characters. The concept of the dragon came from one of the interior artists.

After the cover, I asked to do interior illustrations of monsters; those were a lot of fun. I guess because the success of the Kickstarter I ended up doing something like 30+ illustrations.

Q: What are your interests outside of artwork? How do you unwind?

Unwind, what is that? I love what I do; if I’m not drawing and painting, I’m writing or creating 3-D assets for my game. Even if I take time to sit down in front of the TV with my wife, I’m breaking down the story into the plot beats, dialogue, and so on. My quietest moments is when I know what I have to paint, and then it becomes mechanical to a point and I lose track of time.

Q: I’m asking each person to think about something fantastic or wonderful or scary from all the KP products that would make an awesome gift for Wolfgang for this anniversary. Basically, let’s fill up Wolfgang’s garage with weird and wonderful stuff. What gift would you choose and why?

I don’t know Wolfgang personally, but he seemed to really like the Cthulhu images. Make a huge cutout and put it in the garage, behind everybody’s gift. You know, to remind him of his “monster” success. Not to scare him.

4 thoughts on “Interview with Marcel Mercado”