Skip to content
Home / Delve into the Depths in the Kobold Blog / Play It Like You Stole It! 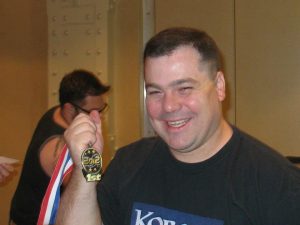 Five years ago, I was writing Living Greyhawk adventures as a volunteer for the RPGA. We were trying new ideas and having fun, but I wanted to do more. I joined Empire of the Ghouls as a senior patron and started learning with the community at Open Design. I playtested, I punched up stat blocks, and when I saw a chance to write an adventure, I asked Wolfgang, “Put me in, coach, I won’t disappoint you.”

That was Tales of Zobeck, and we busted it out for the Silver ENnie; I was ecstatic. I kept contributing, writing, doing what I could for as many different publishers as I could manage. When I was asked to lead a project at Open Design, I jumped at it. I posted the call for patrons and passed out flyers, and I know I held several patrons hostage at the Kobold booth at Gen Con, explaining how we were going to make a great book, but we needed them to make it happen.

And we did it. We busted past our funding at Gen Con, and I went home hoarse and grinning, just like I did this time. For that gift, I want to say, “Thank you.”

Thank you to every patron who believed in the core of this project. Who voted, who brainstormed, who contributed, who playtested to make this the outstanding book it is. 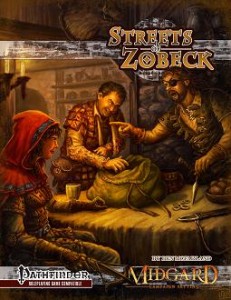 Thank you to Glen Zimmerman, who perfectly captured my imperfect descriptions. Thank you to Gill Pearce and Jonathan Roberts, who turned our rough maps into the perfect heist sketches and beautiful isometrics. Thank you to Chris Bodan, the dark sensei who made our writing-fu strong. Thank you to Crystal Frasier, the Fairy Godmother who managed my inexperienced storyboards so well and spun together the perfect layout and trade dress for Streets of Zobeck to wear to the ball. Thank you to a great crew of fellow contributors who took a theme and a raw vision, and showed it could have so many facets—from Matt Stinson’s desperate alchemist and gearforged dreams, to Richard Pett’s deliciously twisted employers and settings, to Mike Franke’s bloodthirsty killer and a man hoping to cheat an infernal bargain, to Christina Stile’s perfect heist and decadent love triangle—you all came together to create a rich and entertaining book. I wanted to create not only a great set of gritty, urban adventures, but a vibrant slice of Zobeck with wonderfully useful locations and characters that gamemasters would steal just to cameo in their own games. I think we succeeded far beyond my hopes and expectations.

As I said when I accepted the ENnie, this has all felt like a dream—one I’m deathly afraid I’ll wake up from at any moment. So before I do, let me say thank you to everyone who has picked up and run Streets, reviewed it, and voted for it. You’ve made this dream reality, and you’ve shown once again that the Open Design model can create award-winning work. Here’s hoping I can stay asleep for just a little bit longer—I feel like there’s a few more stories out there I’d like to tell . . .

PS—Because I know I couldn’t have done this alone, I’ve gotten my fellow designers to chip in their thoughts on Streets of Zobeck and share what they thought about the project. Enjoy! 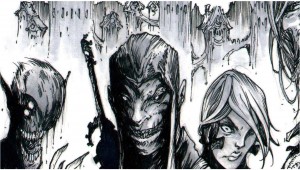 Mike Franke. Streets was a creative avalanche that began with an idea: “We want noir and the paladins better stay home.” I was immediately hooked by the possibility of creating a dark and gritty urban world. Once we began, the patron ideas just seemed to build on each other until we had something great. Underworld items and spells led to dark locations, scoundrel NPCs and finally morally ambiguous adventures. I was inspired by Ben’s restless spirit called the Dragged Woman, intrigued by the possibilities of the Old Stross Bathhouse, and could not wait to explore the Cartways Black Market. For me, the end result was more than just a bunch of related ideas and adventures; it was a dark and gritty world waiting to be explored.

Richard Pett. I’m honored and delighted that Streets won an ENnie and to have been part of the team that delivered this great collection. Once again, it’s proved to me that the thing I love most about Open Design is the thing I most fear about it—the pitches for adventures are all totally anonymous, reputations count for nothing. Only the quality of the adventure counts. To prove a point, whilst the twisted and devious Rust is here, Dorian’s Palace of Diverse Pleasures, my second submission, sank without trace.

Being part of the team is always an invaluable education, and right now I’m working on Sorrow, part of the upcoming Midgard Tales, done through the same process. The last round of pitches was tough; there is a lot of talent out there and some fantastic adventure ideas. I’d urge anyone thinking about learning how to work on adventure design to join us.

Christina Stiles. Streets of Zobeck was the first patron project I decided I just had to pitch for. There was just no way I was letting this one get past me. The gritty, dark adventures and the opportunity to define more aspects of Zobeck called to me, and ideas flowed. In “Flesh Fails” I happily incorporated the Palace of Painful Pleasures and a cult of Marena into Zobeck, and I explored the outcomes of Konrad von Eberfeld’s machinations started in Steam & Brass. And, of course, I created a hideous, garish painting to instigate a heist adventure in “The Fish and the Rose.” Of my NPC creations, Jayzel the bard has become an integral character in my Zobeck campaign. With Ben McFarland’s deft hand at the wheel, this project just knitted seamlessly together as if the Great Rava had weaved it all herself.

Matt Stinson. “My favorite memory from Streets of Zobeck was when I was about to turn in my NPC, Joony, and asked my friend Glen Zimmerman to draw up a sketch of him to turn in with my write-up. The next thing I know Glen is doing the art for the whole book. It was really great watching him show a new piece of the Zobeck’s underbelly every week.