Skip to content
Home / Delve into the Depths in the Kobold Blog / Random Encounters: Out of the Rain 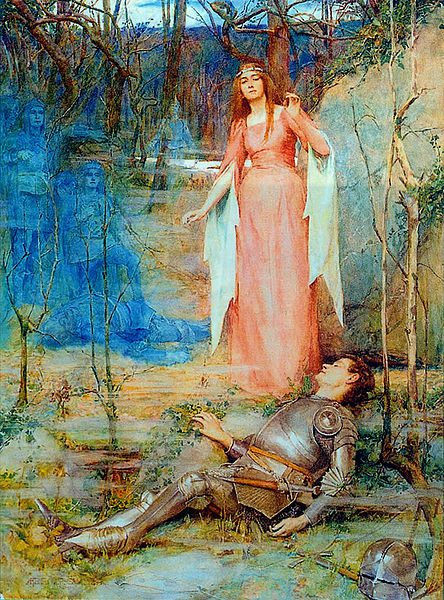 Banshees are the product of elves that have squandered their natural gifts and upon death paid the ultimate price, eternal undeath. Not all Banshees were merely maidens. Some were entertainers and the skills that they learned while living remain, albeit twisted, after their transformation into a banshee. The rhymester banshee’s bardic abilities and arcane skills make it a deadly foe.

The encounter is intended for a party of 6th- to 8th-level characters.

The journey home to Zobeck is particularly wearying. Legs tired, back aching, and a hunger in your belly that rations can’t quite quell have made you absolutely miserable. The light drizzle and muddy trail put that little bit of extra emphasis to make you reconsider the trip altogether.

After trekking through the middle of this gods-forsaken land, you see the first sign of civilization in weeks—an inn. Little more than a glorified cottage but there’s smoke coming from the chimney and you’re almost sure that you can smell fresh bread. The coins in your pocket should be more than enough for a good night’s sleep and a break from your rations. As you get closer, you can hear the sounds of men and women carousing and having a good time. With evening upon you, it looks like you’re in luck and may not have to sleep on the ground tonight.

The sign over the front door—the only door actually—to the inn proclaims the dwelling to be The Laughing Cow Inn.

From the exterior, there is nothing remarkable about the inn. It is well maintained and the interior is warm, dry, and filled with folks enjoying an evening out of the rain and away from the everyday drudgery of their lives. Should the PCs search the exterior of the inn, they find nothing out of place at all.

If they fail at an attempt to examine the interior of the inn, they are noticed by someone inside who laughs it off, “Wotcha doing skulking around, friend? Come in and get dry!” After that, the fellow turns around and ignores them.

The first floor is almost entirely comprised of a single, large gathering room. Tables are scattered around, vaguely arranged around the hearth and a platform in the northeastern corner of the room. The western side is dominated by a well-worn bar and a stair case leading to the second floor. As soon as you enter the inn, the smells of food and drink and the music offer a welcome respite from the drudgery of your travels.

The evening’s entertainment is a lone troubadour singing to the accompaniment of her lute. The crowd is much more interested in their drinks and food than the music. A woman walks over to you and greets you with a warm smile and a friendly face.

“Evening lads and ladies. Looking for a room? We don’t ‘ave much this far out but we do our best. Have a seat and I’ll be back in jiff.” She shuffles off quickly. After a few steps she stops as if remembering something. “The name’s Margit. Welcome to the Laughing Cow.”

Roll some dice behind the screen and make a bit of show about checking something. Or just ask “who’s got the highest passive perception? Ok, what is it?” and nod your head ominously. Regardless of the roll read the following to the players.

An oddity catches your eye almost immediately. There is a figure off to the side of the fire. A pool of water around them tells you that they too have only recently come into the inn. The figure is wearing rain gear, and their features are obscured.

The folks at the tables are just farmers and local laborers. The hooded figure, Barnabus (commoner), has just come to the inn for a few drinks and to get away from it all. Any PCs that attempt to strike up a conversation with him find him to be unfriendly and in a foul mood. He begins any conversation as unfriendly and Charisma-based skill checks have of DC 14. He refuses to answer any questions until his disposition has been changed to friendly, and even then, he’s not a talkative man, preferring one word, monosyllabic answers whenever possible. Barnabus should be roleplayed as evasive and as if he knows more than he’s letting on.

Tonight’s entertainer is Symath, a rhymester banshee. She is actively suppressing her horrible visage and through a combination of disguise self and her skill with deception, she is easily able to pass for an elf while performing.

The bar on the western end of the inn is about a yard wide and runs practically the entire side of the inn. There is a swinging door behind it, presumably leading to the kitchen. Many of the stools are occupied, but there are enough open for the party. With your approach, an enormously ugly man looks at you and with what may be a smile points to an open seat as he hands each of you a mug of ale.

The bar is tended by Reggie, who is deaf and probably the ugliest man the characters have ever seen. Any attempts to order drinks should be played with levity and as much comedy as your group will allow. Reggie cannot speak, communicating strictly by gestures and grunts. He is as deaf as a post, not very bright, and genuinely happy to see the characters. Any insight checks to discern his motive should be at disadvantage due to the difficulty in communicating with him.

Pots, pans, and a stove dominate the small space. The doorway to the main room is the only way in or out of the kitchen.

There is nothing remarkable on the second floor. The stairs lead up to a hallway. Off of the hallway, there are doors on either side with rooms enough for the characters and few extra. The rooms are virtually identical: all have two small beds and a nightstand.

The rooms are not locked and should the characters decide to search thoroughly, a success on a DC 16 Wis (Perception) check suggests that the rooms don’t see a lot of use.

The event takes place while the characters are busy interacting with either Reggie or Barnabus. While their attention has been diverted, Symath has begun to use her influence on the guests. Symath has been playing at the inn since shortly after dusk. She is suppressing her horrifying visage and is playing songs for the crowd. While the songs are being played, Margit and Reggie are encouraging the patrons to drink as much as possible. When Symath makes her move, Margit is conveniently in the kitchen.

The din of the bar has gradually lessened to the point that virtually the only sound you hear is the song of the local bard. Her voice rings out through the room. Her voice is clear and beautiful if a little melancholy. The song has become darker, sadder, more despondent—a dirge when before it was a bawdy folk song. At the crescendo of the song, her voice becomes dissonant, almost painful. Roll a Con save…

The characters may or may not know what’s going on at this point. There is no reason for them to know or suspect that Symath is a banshee. Should the PCs realize it through divine sense or similar magic, Symath immediately attacks the party with her wail, though she no longer has the benefit of surprise.

For a very lethal approach, Symath realizes that the characters are a threat and doesn’t hold anything back. Unless the characters are paying attention to her, she likely takes them by surprise. On her surprise round, she uses her wail. Reggie (berserker) is immune to the wail due to his hearing loss, and Margit is nowhere to be found when Symath begins her attack.

Symath’s next move is largely dependent on how many characters are left standing. She may use her song of eternal rest or hypnotic pattern. Hold person, fear, or suggestion are very effective if there is only a single PC left. She also stops suppressing her horrific visage (Reggie and Margit are immune).

Immediately after the wail, Reggie joins the fray too. If the characters are not paying attention to him, he may also catch them unawares. He has no compunction against attacking a downed PC. Margit (commoner) emerges from the kitchen with a knife and preferentially attacks downed characters.

Playtest Note #1: In a party of five characters of levels 5-8, about half the party failed this initial save. This is highly dependent on the classes represented and the Constitution scores of the players. It’s not likely that this initial attack will result in a TPK, but don’t be surprised if the party only has a character or two left to defend against the subsequent attack.

Playtest Note #2: If Symath chooses to (or is able to) use hypnotic pattern after her wail, the PCs must make a Wisdom save. It’s worth noting that no class is proficient in both Constitution and Wisdom saves. The characters most likely to survive the wail (high Con and/or Con proficiency) do not generally have a high Wisdom score. By this point, the party is down to approximately 3 PCs, and after Symath casts hypnotic pattern, we generally lose 1 or 2 more. Leaving a single PC left to face all 3 opponents.

5 thoughts on “Random Encounters: Out of the Rain”