Skip to content
Home / Delve into the Depths in the Kobold Blog / Your Whispering Homunculus: Curious Locales—Slaughterhouse and Undertaking Emporium, Part Two 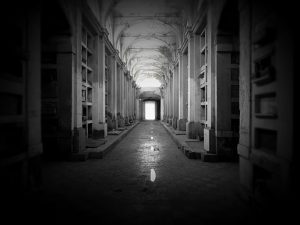 Curious locales are quirky locations for GMs to drop into their campaigns. Free of class and level, they can be used in any fantasy RPG system. They consist of a single locale with a colorful description, characters and relationships, and ideas for adventures and using them in your campaign. Cut and paste them into your adventures and flesh out the detail, or detail out the flesh as you wish…

We continue our look at this oddity of fleshy business where last we opened our doors on the proprietor and her home.

Crab lusts and loves her neighbor Phileas Hamp in equal measure. The dashing poet and landscape gardener is often seen buying her sausages and making her chuckle—a sad fact really because Hamp purely uses the relationship to get what he wants: her property, which is in a fine location and which he intends to convert into a classy brothel for his own deviance and profit. Crab is really just a sad lonely lady, desperate to conceal her extra income from necromantic ends, and to keep her secret in the attic secure. She is a tragedy waiting to happen. She gets frustrated with Hamp and naively tries to make him jealous by throwing herself at strangers, something that is sure, one day, to spell trouble for everyone.

Crab’s emporium is incredibly suspicious, and her odd unfeminine and uncouth ways (despite her beliefs) are sure to have made her many local enemies. Rumors abound about what she gets up to when alone, and her “relationship” with Phileas Hamp is at breaking point for both parties. Hamp wants the place to change into his brothel now, and what better way to get it than have it condemned and sold to him on the cheap? Ideally, some group of ask-questions-later strangers would arrive in the settlement ready to be duped about stories of what meat Crab sells and tales of something in the attic. Let them take what trinkets they want but leave her broken, so he can step in and purchase the place at a song.

On the flip side of that, what better way for Crab to ensure a jealous lover comes careering into her boudoir to propose, inflaming jealous ardor by lavishing her desires upon some handsome or beautiful stranger publicly?

Both Hamp and Crab do have friends although with Crab they are less in number simply because of her dubious and aggressive nature. A whole litany of NPCs is waiting to tell strangers their side of the tale—everyone loves a good gossip after all and a woman who spends half her time making pies and the other half burying people is bound to be the focus of a few blurred lines despite her absolute innocence. Well, perhaps innocence is too kind a word; she does after all keep her dead aunt pickled in the attic. But then, what if she wasn’t quite so dead as she seemed? Supposing Crab wanted more vengeance and had an undead aunt pickled up in her attic, to belittle and taunt and laugh at…

Taking the story into its obvious territory of Sweeny Toddness is a bit transparent, so try to avoid that if you can. However, playing on that lurking suspicion is fine. Perhaps, the plot has already grown, and Crab has sold out to the necromantic friends of hers, giving over in desperation the bodies of loved ones and burying dummies, maybe such acts have driven Crab toward madness and the welcoming arms of the necromancers in fueling her desire for Hamp? Perhaps, Crab is more cunning and has moved traces of her wickedness into the obscene and crooked lair of her necromantic savior—a savior who has cast a spell upon Hamp and who is slowly poisoning a lover into her arms, breaking any will he has so that she can be with him forever.

What after all do two wrongs make?