Skip to content
Home / Delve into the Depths in the Kobold Blog / Full Sleeve Midgard: Variant Gauntlet Witches for Gearforged and Huginn (Part 2) 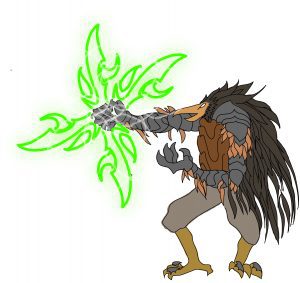 The gauntlet witch archetype first appeared in Kobold Quarterly #23, offering a vibrant alternate option for playing a witch. This article details the gearforged and huginn racial variants of the gauntlet witch in Midgard.

Though admittedly extremely rare, heavy gauntlet witches are formidable beings. Combining the bulk and power of their gearforged frame with the eldritch might of battle-witchcraft, heavy gauntlet witches prove their mettle in the chaos of war or as dedicated bodyguards to those that can afford their services. A few are wanderers, finding solace in the lure of adventure and the discovery of new experiences and knowledge, feeling assured that the power of their adamantine gauntlet will sustain them.

A heavy gauntlet witch’s adamantine gauntlet has the following modifications.

Improved Pain Clasp (Sp): In addition to making a ranged touch attack, as a full-round action, the heavy gauntlet witch may attempt to keep a successfully paralyzed foe both grappled and then prone. A successful combat maneuver check is required for each—if the grapple fails, there is no possibility of making the foe prone. If both combat maneuvers are successful, the target is considered helpless. Maintaining these effects is a full round action.

Telescopic Strike (Ex): At 10th level, the adamantine gauntlet has improved to enable the heavy gauntlet witch to make telescoping strikes—the witch gains reach 10 when attacking with the gauntlet or when using the pain clasp ability.

Trained in aeries in the northern states of Vidim and Domovgorod, talonbearer witches supplement huginn clan-holdings as security, translators, and diviners. In the south, heru talonbearers find service as aides de camp to rich clan-chiefs or they occasionally strike out on their own to bind other less-honorable heru into service, forming motley bands of reavers and raiders. Notoriously proud and haughty, the possessor of a taloned gauntlet is held in high regard in huginn and heru society, though not always without jealous martial detractors.

A talonbearer witch’s taloned gauntlet has the following modifications.

Created from mithral sheets, the taloned gauntlet weighs only 7 pounds, and its fingers end in sharp avian talons. Additionally it bears a series of wicked feather-shaped spikes along the entire outer edge of the arm—these deal 1d4 slashing damage on any successful grapple check against another creature. In addition, any creature that attempts an opposed grapple check to pin, constrict, swallow, or damage the talonbearer witch takes 1d4 slashing damage.

A taloned gauntlet does not confer the Toughness ability, nor can a talonbearer choose the Armor Training gauntlet witch option.

Special: If the talonbearer witch has the edgeborn alternative racial trait (see Midgard Campaign Setting Preview), he or she may use whichever weapon chosen for that trait with the Aegis Strike ability instead of the taloned gauntlet’s spikes. In this instance, the witch may not exchange any spell power for an AC bonus.