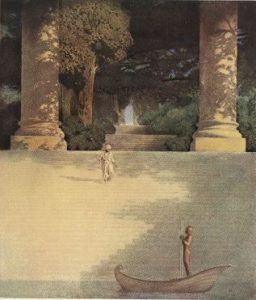 Some things naturally go together, like cake and ice cream. Among them are incredibly rich and unique campaign settings and adventures that stir them to life. Kobold Press combines the distinctive flavor of the Middle East, Egypt, and Africa with the Southlands Kickstarter. Southlands draws upon those exotic lands and distinctive cultures to add even greater diversity to your Pathfinder RPG game. What could be more exciting?

Six years ago, Open Design (the older name for Kobold Press) produced an anthology of adventures, Six Arabian Nights. The anthology featured roleplaying luminaries such as Wolfgang Baur, David “Zeb” Cook, Jeff Grubb, and new authors of the time, Clay Fleischer and Joshua Stevens. To those unaware, Jeff Grubb was also an author of the original Al-Quadim: Arabian Adventures for TSR Hobbies, and a definitive expert on the subject. Six Arabian Nights was our first introduction to the Free City of Siwal, its many enemies, its brave citizenry, the dashing Sultan Al-Mamun—and a host of genies, ghuls, assassins, and sand pirates and their desert ships. Salt krakens! Yet, many Midgard fans have never seen this treasure because it is not for sale. No sir. Six Arabian Nights was commissioned as a patronage project to an intimate group of contributors before the advent of Kickstarter and this ‘miracle of rare device’ has remained exclusive to those patrons ever since. I myself only barely became a backer scant days before the projects was closed to the public.

Sadly for fans of Arabian adventures, Six Arabian Nights went into the kobold vaults, never to be sold again. Take heart though—I have always been the resident “Loki” of the Kobold Crew. I know where Wolfgang hides his treasures, so I found the lock and turned the key. As part of the Southlands project, Kobold Press is updating this lost treasure from D&D 3.5 to Pathfinder and applying a fresh coat of paint and wax. Additionally, I’m adding a brand new adventure to the anthology, which we’re renaming Eight Arabian Nights (Editor: the Kickstarter has already funded an eighth adventure!). I have to add—Kobold Press won’t be selling this volume. It remains an exclusive item to its patrons, but we’re including it as a reward to certain backer levels in the Southlands Kickstarter. After the Kickstarter concludes, Eight Arabian Nights will not be available for commercial sale.

I asked Wolfgang to consider me for this endeavor because of my own love of pulp adventure and Middle Eastern stories of outrageous adventure. I am unashamed to say that my introduction to the genre was the Ray Harryhausen films, particularly those featuring Sinbad the Sailor. I am of an age where I was fortunate to have seen Harryhausen’s work on the big screen upon their original release. Since those days I have been in love with scimitars, flying carpets, genies—not to mention the talking trees, robots, mummies, sentient snakes, and sexy moon-puppets. Wait—what!?

Well, as I was exploring One Thousand and One Arabian Nights for source material on my adventure, I discovered that any time you collect over a thousand original stories, some of them get weird. Pop culture reinforces stories like Aladdin and his Magic Lamp and Ali Baba and the Forty Thieves time and time again, but it turns out Scheherazade (the fictional narrator of the One Thousand and One Arabian Nights) had a far more vivid imagination than for which she is given credit. Fans needn’t worry, though; I won’t stray too far from classic Arabian themes, but the playing field is wide open without overreliance upon archetypal stories. My adventure, Divided Hearts, introduces divs to Midgard. Divs, those enemies of Creation, are open content horrors brought to life by my good friend Adam Daigle, Paizo Developer and Open Design alumni. Mystery, danger, and romance, with a side order of the strange await those who walk the streets of Siwal!

Please join Wolfgang and his cadre of top-notch designers and developers in the mysterious Southlands today!

9 thoughts on “Southlands and the Arabian Nights”