Skip to content
Home / Delve into the Depths in the Kobold Blog / Real Steel: Kerambit 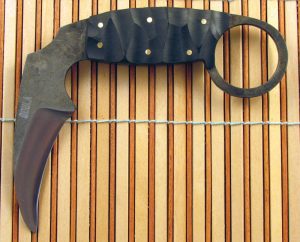 Gamers are fairly well versed on the wide variety of real life weapons that have made their way into our campaigns. It’s pretty unusual that I feel like I can show you something that there’s even a small chance you haven’t seen before. I’ll bet that for some of you, this is one of those rare gems.

The region that includes the Malay and Indonesian archipelagos has a long and rich history of martial arts that include brutal and effective knife and sword fighting. These are combat-oriented arts, and most of them do not have sub-schools that have evolved into a sport form. To this day, they remain “all business.”

Standing behind that rich history is an equally fascinating culture of primitive bladesmithing. Although times change everywhere, and modern power tools have crept into almost all cultures, bladesmiths in this region still primarily use primitive methods. 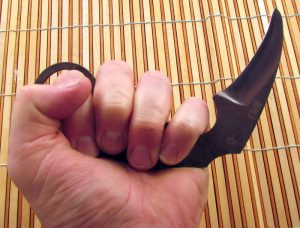 The kerambit is thought to have been created in the Sumatera Barat province of Indonesia, and it spread broadly from there. As with many weapons that started as tools (in this case, as in many, a farm implement), it was a peasant’s weapon. As its use as a weapon increased and its form evolved, it became more curved. There is some evidence that it’s based on the claws of a big cat. Looking at the knife, this makes perfect sense.

Starting as a peasant weapon used primarily by women, the kerambit came to be used in a number of fighting systems. The blade length and degree of curvature is variable, and it may have a finger ring, or not.

The finger ring increases retention and can be used to reinforce the fist for punching. The blade can be grasped with the pinkie through the ring, or with the index finger through the ring.

Depending on how long the blade is and the angle of the curve, as well as the way the knife is held and oriented, it can be used to pierce, slash, or hook. It’s the hooking that makes this knife unique. When used in close combat, it can be hooked behind the neck, arm, or under the jaw. Aside from the primary damage caused by this attack, the successful hook can be used to pull an opponent into a second weapon, usually a large knife or short sword. Used by itself, it can enhance grapples and trips. It’s nasty and versatile.

How I Made It 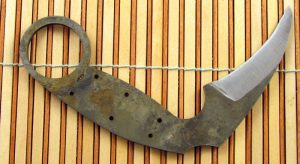 There were some specific elements requested to be built into this knife that required some careful design considerations. My customer wanted an overall 90% angle, a large ring, and a chisel grind. Because the ring was clearly going to get in the way of blade grinding, I made it in two pieces, with the ring being made from a piece of thick walled steel pipe and MIG welded to the handle after the blade was ground, hardened, tempered, and sharpened. Subsequent hand sharpening can be done fairly easily now, but I do the initial sharpening on a big belt grinder that requires room to maneuver.

The handle is made from a phenolic product called Garolite (it’s the same thing as Micarta, but each name is trademarked), which is made from paper and epoxy that are squeezed together under high pressure. The scales are held in place with brass pins, and are textured by using a small wheel on the belt grinder.