Skip to content
Home / Delve into the Depths in the Kobold Blog / On the Road with Phileus J. Abbertale: Fire and Ice

Alas, it has been a pleasure to share my exploits and insights over the past several months with you, my dear readers. My journal pages have taken us across the breadth of Midgard from the soaring peaks to the scorching sands. Therefore, it only seems fitting for us to part company with a celebration at the top of the world in the frozen north.

Sadly, with each passing year, my tolerance for cold declines. In my youth, the frigid air inhaled into my eager lungs invigorated my spirit with renewed vitality. Now, the same breath feels like hundreds of needles pinching my innards. Nonetheless, as my sixtieth year approached, I ventured back to the north to reunite with old friends and travel companions to primarily commemorate the thirtieth anniversary of our trip and secondarily my sixtieth birthday. 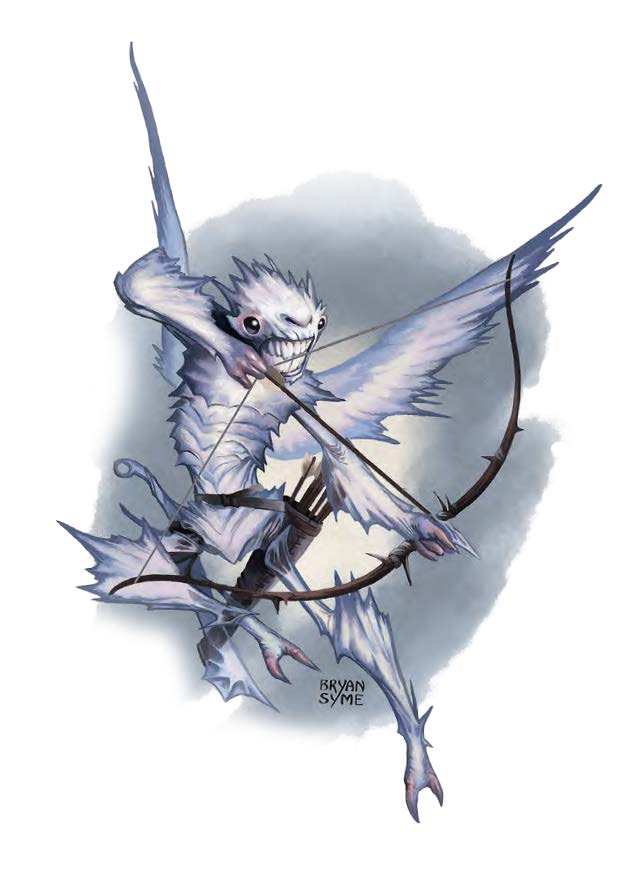 The feast began with an assortment of wondrous northern delicacies accompanied by joyful voices and feet. Songs resonated through the longhouse’s rafters. Rhythmic heels and toes intermittently pummeled and floated atop its wooden floors. Many attendees raised their glasses and recounted our wondrous adventures while still paying tribute to the unfortunate souls we lost along the way. After some introspection, the guests stunned me with a magnificent cake illuminated by sixty wax candles. Sadly, the sweet dessert was not the evening’s biggest surprise. As I prepared to extinguish the flames with a single exhale, uninvited party crashers rudely interrupted the affair.

The small winged fairies swooped down from the ceiling and swiped the guests’ tasty morsels right off their plates. Their pale white skin and translucent wings blended in with the snowy outdoors as well as the white table linens and décor. Only their beady black eyes stood out among the background.

Several voices in the crowd rang out in unison. “Beli!” they shouted. Before they could finish their exclamation, icy arrows whizzed across the hall. This was not my first encounter with these malevolent fey. The beli and I met once before, thirty years ago, during my previous jaunt in the frozen north. Yet this band was different than their predecessors. They displayed no outward fear of fire leading me to conclude they were indeed the rare singed beli. (See the notes at the end of my journal for details on these variant monsters.)

Worse still, the singed beli were not alone. A quintet of fraughasher mischief makers joined them in the mayhem. (See the notes at the end of my journal for details on these variant monsters.) Although they shared the same physical characteristics as their brethren—blue skin, distended noses dripping with icicles, and a goblin’s build—these five individuals differed from the ordinary, just like their singed counterparts.

What offense or slight prompted the rude interruption defied explanation, yet now was not the time for a debate or concerted inquiry into the matter. The precarious situation demanded a swift and immediate response from our veteran members. Much to our dismay, nothing, including fire, dissuaded them from continuing their assault. Nonetheless, we held our ground and ultimately, the monsters’ impetuousness proved their undoing. They fled or died emptyhanded. After regrouping, gathering our senses, and tending to the injured, the celebration resumed. On that inauspicious evening, we savored every bite of the delicious desserts the interlopers desperately coveted.

Many humanoid cultures adhere to the adage, “what doesn’t kill you only makes you stronger.” The singed beli embody this axiom better than no other.

These wicked sprites suffer from two phobias. They loathe fire and the druids indigenous to their region. When a beli survives a brush against one of their sworn foes who dealt fire damage to them, the encounter permanent alters the creature’s mind and body. It overcomes its fears albeit at a steep cost. The ordeal wipes away any residual playfulness from its psyche and replaces it with a fiery rage, emblematic of its dalliance with the druid’s flames. The monster becomes a variant form of beli known as a singed beli. Their detractors often refer to them as the fire and ice brats, because their spiteful tantrums resemble those of a spoiled child

Burnt Once: Although singed beli still loathe northern druids and their ursine companions, they no longer fear them. Indeed, surviving and overcoming their greatest fear permanently relieved them of the burden of fright.

Fire Starters: Beli still enjoy disrupting feasts and pilfering holiday cakes, but they now wait until the hosts light candles before they crash the event.

Brush with Flames. Singed beli no longer have vulnerability to fire.

Cold Regeneration. As long as the temperature is below freezing, the beli regains 3 hit points at the start of its turn. If the beli takes fire damage, this doesn’t function start of the beli’s next turn. The beli dies only if it starts it turn with 0 hit points and it doesn’t regenerate.

Flyby. The beli doesn’t provoke an opportunity attack when it flies out of any enemy’s reach.

Innate Spellcasting. The beli’s innate spellcasting ability is Charisma (spell save DC 12, +4 to hit with spell attacks). It can innately cast the following spells, requiring no material components:

Petulant. Singed beli have no patience whatsoever. They can never ready an action and must use their reaction, including tantrum (see below), the first time an event triggers a reaction. This trait does not grant the singed beli more than one reaction per turn.

Icy Shortbow. Ranged Weapon Attack: +5 to hit, range 80/320 ft., one target. Hit 5 (1d4+3) piercing damage plus 2 (1d4) cold damage, and the target must make a successful DC 13 Constitution saving throw or gain 2 levels of exhaustion from the arrow’s icy chill. If the save succeeds, the target also becomes immune to further exhaustion from beli arrows for 24 hours (but any levels of exhaustion already gained remain in effect). A character who gains a sixth level of exhaustion doesn’t die automatically but drops to 0 hit points and must make death saving throws as normal. The exhaustion lasts until the target recovers fully from the cold damage.

Tantrum. Whenever a singed beli fails a saving throw, it loudly whines and complains about its misfortune. It suffers disadvantage on saving throws and attack rolls made until the start of its next turn.

The fraughashar’s despicable patron deity takes personal interest in his servants’ machinations. When a fraughashar gains another sentient creature’s trust through trickery and then cruelly slays that creature in a twisted act of betrayal their dark god rewards the conniving minion by transforming the devotee in a fraughashar mischief maker. These demented fey frequently work alongside the devious beli who share their revelry for malice and torment.

Sacred Rivers. They view cold rivers and river gorges as sacred places in which their wicked god Fraugh dwells, and they likewise revere the snow peaks where the Snow Queen holds sway. Fraughashar are fiercely protective of their territory, and their easy mobility over frozen and rocky terrain lets them make short work of intruders.

Schadenfreude: The fraughashar mischief maker takes wicked delight in the suffering of others. It takes fiendish enjoyment watching other creatures slip and fall in its icy domain, especially when one of its kin causes the victim to tumble onto the ice and snow.

Chilling Tales: The origin of the strange and deadly fraughashar is unclear. Some druidic legends claim the fraughashar were born out of a winter so cold and cruel that the spirits of the river itself froze. Bardic tales claim that the fraughashar are a tribe of corrupted goblins, and that they were permanently disfigured during a botched attempt at summoning an ice devil. Whatever the truth of their beginnings, the fraughashar are cruel and merciless, and they will kill anyone who enters their land. 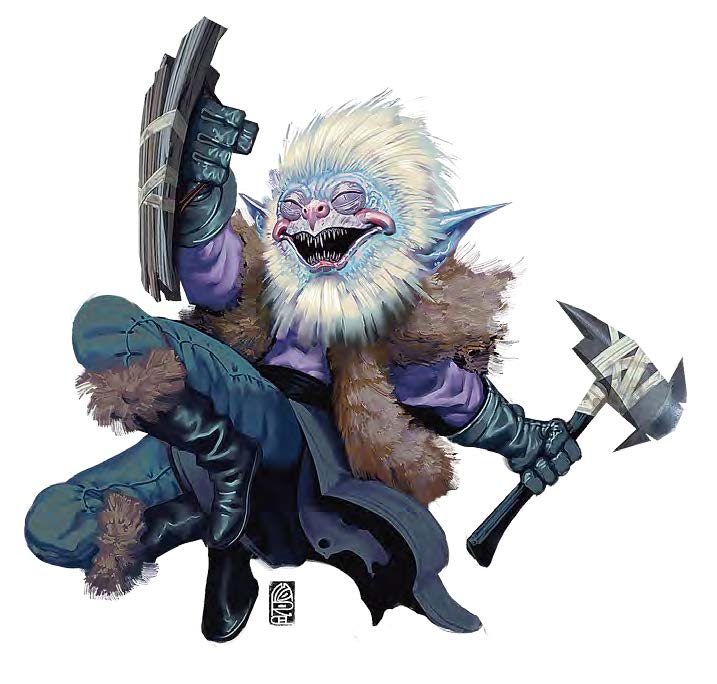 Frost Walker. The fraughashar’s speed is unimpeded by rocky, snowy, or icy terrain. It never needs to make Dexterity checks to move or avoid falling prone because of icy or snowy ground.

Manipulate. The fraughashar mischief maker can manipulate objects by thought for 1 minute. It can use an action each round to move or manipulate an object weighing less than twenty pounds that it can see within 30 feet and isn’t being worn or carried by another creature. It can affect the same target round after round, or choose a new one at any time. The mischief maker can move an object 30 feet in any direction or exert fine control to manipulate a simple tool, open a door, stow or retrieve an item, or pour liquid. It automatically fails any task requiring it to succeed on an ability or skill check when using the manipulated object or attempting to manipulate the object, thus it cannot open a door requiring a Strength check to open or use a handheld tool to pick a lock requiring a Dexterity check. The mischief maker can also attempt to strike another creature or object with an object it moves with its action. It makes a ranged attack against a creature or object treating the item it moves as an improvised weapon. On a hit, the target takes 1d4 damage of the appropriate type — bludgeoning, piercing, or slashing based upon the shape of the object it manipulates. Once used, it can’t use this trait again until the fraughashar takes a long rest.

Multiattack. The fraughashar makes one bite attack and one dagger attack.