Skip to content
Home / Delve into the Depths in the Kobold Blog / Of Magic & Monsters: Variant Goblins from English Poetry 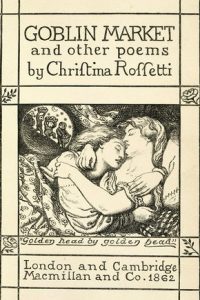 The sister of the renowned pre-raphaelite painter Dante Gabriel Rossetti, Christina Georgina (1830-1894) was a feminist poet involved in the pre-romantic English literary movement. In her most famous poem, “Goblin Market,” she describes a band of goblins characterized by beastly features. 5E stats are provided for those unusual monsters, aimed at GMs who want to give a fresh spin to a too-much-classic critter.

Plump unpecked cherries,
Melons and raspberries […]
One had a cat’s face,
One whisked a tail,
One tramped at a rat’s pace,
One crawled like a snail,
One like a wombat prowled obtuse and furry,
One like a ratel tumbled hurry skurry…”

Including Rossetti goblins in fifth edition adventures is easy. It is sufficient to apply the following traits to the standard goblin stats found in the core rules. 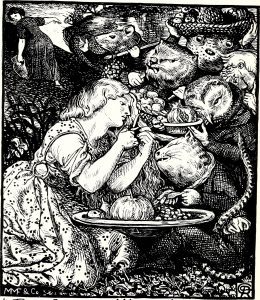 Feline goblin. This creature has an head covered in reddish fur, pointed ears and long whiskers. Differently from the standard goblin, it has a speed of 40 ft. and the following capability:

Pounce: If the feline goblin moves at least 20 feet straight toward a creature and then hits with a melee attack on the same turn, that target must succeed on a DC 11 Strength saving throw or be knocked prone.

Tailed goblin. This goblin shows a long, serpentine tail useful to attack. Instead of the standard shortbow attack, this critter has the following attack option:

Tail: Melee Weapon Attack: +2 to hit, reach 10 ft., one Large or smaller creature. Hit: 2 (1d4) bludgeoning damage and the target is grappled (escape DC 11). Until the grapple ends, the target is restrained and has disadvantage on Strength checks and Strength saving throws, and the goblin can’t use the tail on another target.

Rat goblin. Covered in dark gray oily fur and with large teeth, this monster has a speed of 60 ft.

Snail goblin. The lower part of this goblin’s body resembles that of a snail, and on the back a strong carapace can be found. Its speed is only 15 ft., but its AC is 16 and has 13 (3d8) hit points. Its Challenge Rating is ½.

Wombat/ratel goblin. These creatures are the result of a magic fusion between humanoids and small, ferocious subterranean animals. They have a burrow speed of 30 ft. and the following trait:

3 thoughts on “Of Magic & Monsters: Variant Goblins from English Poetry”