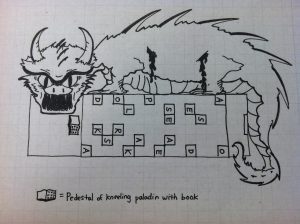 Puzzles, traps, and hazards are a common occurrence in deadly dungeons. You might find that it can be quite time-consuming and challenging to come up with these events on the fly. In this series, you’ll find three fire-themed dungeon dangers ripe for plunder.

A wave of heat washes over you when you enter a long and unusually bright room. A pit of lava as wide as the room blocks your passage. At the pit’s edge stands a four-foot-high stone pedestal with nine dull-gray glyphs upon it. A life-sized carving of a dragon’s head with a gaping mouth bigger than a man juts out from the wall. The rest of its body turns into a tiled mosaic running the length of the wall.

Room dimensions are 110 ft. x 30 ft., and the lava takes up a 70-ft. x 30-ft. section of the room. The hewn stone wall without the mural requires a successful DC 25 check to climb. The opposite wall with the mosaic is a DC 27 check, but it also has cracks oozing lava that require a separate Athletics or Acrobatics check to deftly navigate (DC 22).

A closer look at the dragon’s head reveals a pair of boot-shaped impressions upon the tongue, facing out of the fang-laden mouth. Directly above the boot prints are a pair of fist-sized holes in the roof of the dragon’s mouth.

The pedestal is of expert craftsmanship, carved and polished to look like a kneeling paladin displaying a large book. Inlaid upon the pages are nine dull-gray glyphs that emanate a weak magical aura.

History or Religion DC 17: This paladin was consumed by flame in his golden armor while defying the legendary red dragon, Reshkyrn.

To activate the glyphs, a character must be standing in the mouth of the dragon and reach up into each of the holes and grasp the handles within. This act simultaneously binds the character magically by his or her hands and feet, and causes the glyphs to become functional, glowing brightly.

The glyphs are letters from an old dialect of Draconic that can be read easily by a character who speaks Draconic, uses the Comprehend Language ritual, or succeeds on a History check of DC 18. There are nine letters in a 3 x 3 grid.

When a glyph is pressed, it glows red, and a corresponding set of stone platforms rise out of the lava to form stepping stones detailed within the diagram. Only four glyphs can be lit at any given time. The platforms are barely big enough to hold one Large humanoid; platforms 2 squares apart require a DC 30 Athletics check to jump (+5 per additional square apart). Characters can safely move between platforms that are only 1 square apart. Falling in the lava inflicts 2d10 + 8 damage per round spent in the lava.

When the first four glyphs are pressed, the dragon mouth jerks closed partially and a fire builds in the back of its throat. After these first four, a glyph must be pressed again to be deactivated before a new one can be pressed. Every two newly initiated glyphs causes the mouth to close further and fire to grow.

*The dragon’s mouth stays clamped shut, inflicting 10 damage per round until released.

There is only one combination of four letters that provides a safe and passable path across the lava pit. If at any time the four letters S-E-A-R are all pressed, the paladin’s head lowers and the glyphs become locked from changing, indicating success. On the far side of the lava pit, the tile mosaic of the dragon’s tail protrudes from the wall, forming a movable lever. This releases the character from the dragon’s mouth and returns the mouth to its original starting position. To reset the puzzle and platforms, the paladin’s head or dragon’s tail can be physically moved back into place.

Overcoming this puzzle could involve your players trying to randomly guess the correct combination of letters or thinking through plausible solutions. During this time, they may seek more information or clues. The GM can decide how much to reveal and when about the mechanism:

Perception DC 15—Based on the fact that only four glyphs can be pushed, it is likely that the solution is a four-letter word.

History DC 18—Reshkyrn was a ferocious red dragon who was known for dwelling near active volcanoes, roasting would-be dragon slayers. He was overwhelmingly narcissistic.

History DC 22—The paladin portrayed here, Elrik, was avenged by his two siblings, Sym and Alana.

NOTE: The letters, backstory, answer, and hints of this puzzle can be changed to suit the needs of a campaign by swapping the letters out and modifying the story.

Frank Tedeschi is a Cleveland-based DM, blogger, aspiring freelance writer, musician, and Biochemist. RPGs have played a strong role in his life for many years, and his recent DMing experience has driven him to start a Dungeon Master focused blog at DnDIY.wordpress.com. He has contributed to several Open Design projects including the Midgard Campaign Setting and the 4th Edition Midgard Bestiary.

8 thoughts on “Puzzles and Pitfalls (Part 1)”