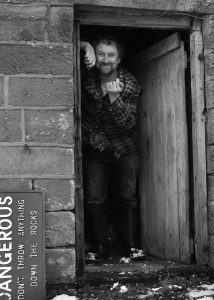 Long-time contributor Richard Pett always comes up with gaming tidbits guaranteed to send a creepy chill up your spine. The author of Your Whispering Homunculus and many adventures never fails to create scenarios filled with suspense and mystery.

To help celebrate the upcoming 10th anniversary of Open Design, Richard shared some of his memories of working with Wolfgang Baur on Open Design and Kobold Press.

Q: What was the nugget of inspiration that got Your Whispering Homunculus started? Please describe the origins of the feature.

Hah, good question and one to test my failing aged memory. If I remember rightly, lovely Scott Gable was editing the KQ website and looking for content. I can’t remember who asked who, but the idea of a semi-regular series of quirky articles came up. We ran through several titles—all of which are mentioned in the YWH collection before Scott came up with YWH, clever boy that he is.

It’s crazy that it’s been going since 2009 and had well over 50 articles since then—including, of course, a guest slot by Wolfgang himself, huzzah!

We’ve always looked at YWH as something that should only come out when it has something to say—it would be sad to try to be more regular and lose its twists—that’s why it tends to come out in little spurts, and Wolfgang and Miranda (Horner, website editor) are very understanding about that.

Q: Do you have any favorite YWH entries during its run? What made them particularly memorable?

In terms of memorable ones, the 100 pets one is memorable; also any that involve hopeless local peasants and their concerns are good. I also really liked the topic of conversation for animals—it’s taking something that’s at the heart of RPGs and twisting it.

Q: I think the readers would be interested to hear you describe where you live. Be as poetic and descriptive as you wish.

I live out in the Derbyshire Moors in England near to a place called Alport Heights. It’s a fantastic ramshackled building we bought at auction and then slowly did up over the 11 years we’ve been here—it’s always got field walls falling down and bits that need repairing. It’s full of animals and is a wonderful place to live. I even have a little spot at the very ends of the land here where I might like to be buried. That’s if we stay here. We keep saying we’ll move to Italy for the climate, but personally I’d still love to live in Scotland so I’m next to all the mountains all the time, although the midges and rain are a bit of an issue.

If you’ve watched American Werewolf in London—that’s my local pub.

Q: In what way does your surroundings contribute to your subject matter or your writing process? (And if you have other influences, literary or environmental, please share).

Bizarrely very little, despite being an outdoors worker and being totally into the wilds, I guess I’m better known for my urban stuff, which is strange. I keep trying to get my Game of Thrones with dark fey idea moving, but am always so busy. It’d be awesome to do that though, one day…

Literature-wise, I read a lot of history and exploration books; fantasy-wise I’m a big fan of Robin Hobb, China Mieville, Jeff Vandermeer, and Tad Williams. But I read an awful lot of stuff. I’ve just finished Dunton Found and I am now onto a Scottish lighthouse mystery true story. Orwell’s 1984, the Lord of the Rings, and The Day of Triffids would be amongst my three big loves though.

Q: Writing adventures has got to be the toughest gig in the adventure-game biz. How has the writing and development process changed since Dungeon magazine? Have audience tastes in adventure changed, and if so, why? Have publisher and or gamemaster expectations changed?

The competition to me seems to be very stiff, which is great, as it makes you constantly up your game. I mean really, great. There are some awesome people out there. In the early days of Dungeon, Greg (A. Vaughan), (Nicholas) Logue, and I felt like the Three Musketeers. But every time I saw their name in print, I dreaded it, as they’d always come up with something cool. When I came to look back at the early stuff I’d written for the Blight—which I began in 2009—it was amazing how rough it was. So I must have upped my game a lot since then, and still must, to be competitive.

Q: Share, if you would, about how you met or interacted with Wolfgang over the years. Any reminisces that are special?

I have a weird kind of relationship with Wolfgang. I sort of see him as a knowing RPG uncle, someone to respect and take very seriously. Although I know he has this amazing quirky side; I suspect he’s seen lots of Monty Python in his day. He’s incredibly positive, too.

I really loved meeting him and his family at Paizocon 2012, which was just brilliant. I remember getting Shelly a bunch of flowers and going for a meal with them and it being great; shame it’s not normal in life to meet someone as honest as Wolfgang, which only happens rarely.

Q: “Hollow” really set the tone for the adventures in Tales of the Old Margreve. Can you walk us through the collaborative process under Open Design—its advantages and challenges—and how it influenced your design.

I love Hollow, it’s still—like Sorrow—one of my favorite adventures I’ve written, and a great anthology to be associated with; there were some great adventures in that baby. Eastern Europe is a place I love; big forests, awesome history, great folklore, so as a bit of a folklore fan I knew a few tales I thought fitted. But I wanted a big forest with something out there that kept coming back for more—I suppose a little bit like Sleepy Hollow, which now I think of it, I guess must have influenced it a lot. Hah, I’ve never thought it through before.

With Wolfgang, it’s all about his faith in you to come up with something different and trusting you enough to give you loose rein.

Q: I just ran Cat and Mouse for my group using fifth edition rules. There are some richly portrayed NPCs, and the setting of the Southlands really comes through their descriptions and motivations. What was the creative process for that adventure?

Huzzah! Oo, memorable NPCs are a tricky process to explain; I have a kernel of an idea and let it run—usually when I’m swimming or walking so it can just fester and grow. Say—fat gnoll obsessed with eating meat all day—explode and explore that. For the sequel to Cat and Mouse—Grimalkin—we have some awesome NPCs a step further down the line from that adventure. I think you’ll like them.

The process for C&M was to hang the NPCs thickly into a travel guide to Per-Bastet, which to me is just like one of my very favorite places—Fes—and wandering that city hangs heavily in my memories.

Q You are credited as a designer on Southlands. What was your contribution and what made the project attractive to you?

Not a huge amount; Kesara the land of the Saffron Rajah, the Restless Prophet (love that illo) the Skin Stealers, and the Ashen Bats—great fun. That’s one of the things I love about working for Wolfgang—the diversity of settings and the freedom he gives you to express yourself in them. Again it’s a fabulous product to be associated with, as well as being involved with Wolfgang, who is splendid.

Q: Go back in time to when Dungeon and Dragon ceased being print products. Then Wolfgang launched Kobold Quarterly. What were your thoughts during that time period; how did you perceive a quarterly magazine; and Wolfgang’s other enterprise, Open Design?

If I’m being honest, I know these things can have short shelf lives, so I was braced for it being a short-lived period in my life. My feeling at that time was that RPG design was just something I’d do and then move on from. I didn’t think I’d still be working in the industry. However, both Wolfgang and Paizo clearly had oodles of talent, so I assumed they’d still be around in one way or another, just that I’d be a part of their history by then.

Q: What are your gaming preferences? What kinds of adventures do you prefer? Are you part of a longstanding group, or do you move about? GM or player?

Believe it or not, I’ve RPG played with my oldest mate Roost since we were 12, so we’ve gamed for almost 40 years—wow—we’re so old. We’ve been in the same group over the years, people come and go. One of our best players—Jeff—died a few years ago; the Blight is dedicated to him, and some of his PCs still live there, which is a very odd feeling but I know he’d love it.

We think we’re the only group still playing Flashing Blades RPG in the world. We’re also doing Waterdeep and some Call of Cthulhu. If I’m being really honest, as we game on a Monday evening, all I really want is a bit of heroics and hack and slash at that time. My brain is too full of stuff to concentrate on anything too tricky.

Q: Anything non-gaming keep you busy? What other hobbies or activities to you enjoy?

I’m very big on the outdoors. My idea of heaven is scrambling along a perilous rock face or ridge in Scotland or Italy. And I love photography—that’s what I was originally trained to do, although I’ve had lots of jobs.

Q: To conclude each interview, I’m asking each person to think about something fantastic or wonderful or scary from all the KP products that would make an awesome gift for Wolfgang for this anniversary. Basically, let’s fill up Wolfgang’s garage with weird and wonderful stuff. What gift would you choose and why?

This creature resembles its master; but a stitched rag travesty of the true Wolfgang—its stitching a little frayed at the seams and its smile a touch demented. The homunculus can take over its master’s more mundane duties at any time to enable him to spend time in any other way he wishes. The fabricated creature may stagger a little crookedly, and it is never parted from its London policeman’s hat, but it assists its beloved master as any construct would.

Unfortunately, the ragged homunculus does have a tendency to whisper nursery rhymes, strange songs, or private jokes to itself, and occasionally paw at its master’s head whilst he sleeps, but we’re sure that’s just affection…

3 thoughts on “Interview with Richard Pett”